Chaos in the transition from sleep to awake

Danish researchers from the Niels Bohr Institute at the University of Copenhagen have investigated how to describe one of the most significant state changes in the brain, namely the transition between sleep and wakefulness. They have discovered that this transition can be described as a qualitative and quantitative change in the dynamic membrane potential pattern of the neurons and that this transition is facilitated by a change in the concentration of the ions present in the brain’s extracellular environment. The results have been published in the scientific journal Cell Systems (Cell Press). 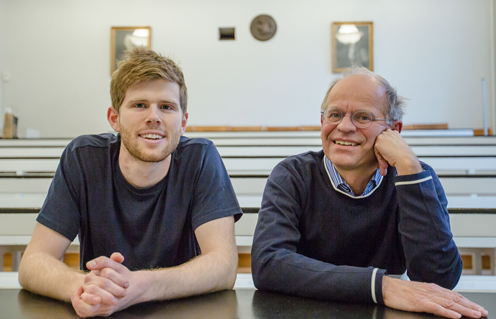 Professor Mogens Høgh Jensen and PhD student Mathias Heltberg in the historic Auditorium A at the Niels Bohr Institute on Blegdamsvej.

The brain’s nerve cells (neurons) form an infinitely complex network and understanding their interaction and coordination is one of the great challenges of science. The brain’s neuronal activity depends on the overall state we are in (deep sleep, light sleep, sedentary awake or awake and active), and this is important for how sensory impressions are processed.

Based on research in both humans and animals, we already know a great deal about the characteristics of the neuronal firing patterns in these well-defined states. But how the individual neuron transitions from one state to another and the mechanisms that orchestrate this change in state are still not sufficiently understood. This complex interplay, where extracellular signals affect neuronal dynamics, is a very important element in understanding how the human brain works.

Now, a group of Danish researchers has observed, using mathematical calculations and computer simulations, how previously reported changes in extracellular ion concentrations can affect transitions between the sleeping and waking activity in the individual neurons.

The pattern is changed

“We started with the extracellular ions that changed their concentration in sleeping and awake laboratory animals in experimental experiments. Our hypothesis was that this change could contribute to the transition between these two main states. Therefore, we were very excited when the computer simulations showed that the experimentally observed values, together with an ion-permeable protein, were enough to create a significant transition in line with what we see in living organisms,” explains Rune Rasmussen, PhD student in neuroscience at DANDRITE at Aarhus University.

It turned out that the transition between sleep and wakefulness not only provided statistical changes, but also represented a well-defined change in the pattern by which the neurons send electrical impulses (so-called action potentials). While the activity in the sleeping neurons was characterised by mathematically well-defined oscillations or limit cycles, the awake state neurons showed non-linear chaotic dynamics. And this change provides an important tool for describing the transition between states of the brain.

“Chaos is a well-defined mathematical concept and it was therefore exciting when we discovered that the ion changes seen in the experiments lead to chaotic dynamics. This also allows for a real description of a transition that we all know very well and makes it possible to understand how to remedy both falling asleep and waking up,” explains Mathias Heltberg, PhD students in Biocomplexity at the Niels Bohr Institute at the University of Copenhagen. 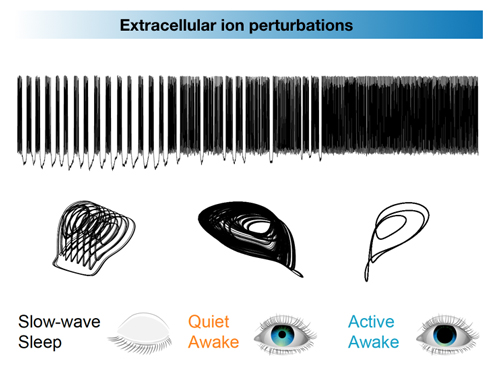 The article explores how ions can control the neuronal firing patterns and how the dynamics change in a transition to chaos (top graph). This transition represents what happens when organisms go from a sleeping to waking state and could potentially provide a new angle on how to define sleep. These dynamics can also be visualised in a three-dimensional phase plot (in the middle), which makes it easier to detect differences between regular oscillations and chaotic dynamics.

New insight into the importance of sleep

However, despite the results, the researchers point out that there is still a long way to a full description of individual neuron activity and an overall state of the brain. But the results provide a new perspective on the transition and gives rise to new ideas for understanding the role of sleep and how the biology of the brain controls sleep.

“It is interesting, because it is usually assumed that neurons rebuild connections during sleep when it is quiet and they are not exposed to excessive stress. Our description supports this hypothesis and allows the neurons to act in step with each other. This could potentially be an important element due to the large complex network between the neurons,” explains Mogens Høgh Jensen, Professor in Biocomplexity at the Niels Bohr Institute at the University of Copenhagen.

The researchers point out that what they have shown is that you can describe the dynamics during sleep and awake states, thus separating them as a well-defined transition between different types of dynamic behaviour. This could have important implications for how we regard the importance of sleep and how the interaction between different parts of the brain works during sleep.

The article titled “Chaotic Dynamics Mediates Brain State Transitions, Driven by Changes in Extracellular Ion Concentrations” has just been published online by Cell Systems (Cell Press) and will be published with a cover page illustration of chaotic neuron dynamics on 27 December 2017.