A Danish-American research team has shown that it is possible to produce ‘Majorana particles’ in a new ‘building material’. The research, led by scientists from Niels Bohr institute, University of Copenhagen, paves the road for new types of experiments - and at the same time represents an important contribution to the construction of the information circuits of tomorrow.

Fabrizio Nichele in the lab at Center for Quantum Devices. The scientists keep their samples in the transparent 'cabinet' - in an oxygen-free environment. Photo: Ola Jakup Joensen

Ever since Ettore Majorana – legendary and mythical Italian physicist – back in 1937 suggested the existence of a particle that is also its own anti-particle, scientists have been searching for the ‘Majorana particle’, as it is has come to be known.

This far the search has been to no avail

A team of scientists from Center for Quantum Devices at Niels Bohr Institute (NBI) and from Purdue University, USA, have – however – recently contributed to the advancement of Majorana research. 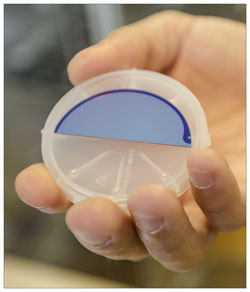 The blue part of the structure - one half of a wafer - is where the scientists start building the nano wire. Photo: Ola Jakup Joensen

Not by finding the elusive particle itself, but by figuring out how to produce a material in which electrons behave in accordance with the theoretical predictions for Majorana particles.

The results of the research project are published in this week issue of the scientific journal Physical Review Letters.

An anti-particle is an elementary particle – identical to its ‘counterpart’, but with opposite electrical charge. As seen in the relationship between negatively charged electrons and positively charged positrons.

If a particle is also its own anti-particle – which, given it does indeed exist, will be the case with a Majorana particle – it will therefore have no charge at all.

The properties that, according to Ettore Majorana´s calculations, will characterize a Majorana particle do for a number of reasons fascinate scientists. Obviously because such properties ‘packaged’ in one particle will represent new experimental possibilities. But also because Majorana-properties are thought to be useful when scientists are e.g. attempting to construct quantum computers – i.e. the information circuits of tomorrow that will have the capacity to process data loads far, far heavier than those dealt with by our present super computers. 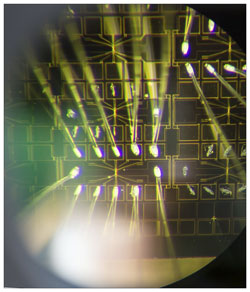 The nano wire is embedded in spider shaped structures. These structures are here seen through the lense of an optical microscope. The structures sit in rows, two in each row. Photo: Ola Jakup Joensen

All over the world scientists are trying to design quantum computers.

It’s a race - Center for Quantum Devices at NBI is one of the contestants – and assistant professor Fabrizio Nichele and professor Charles Marcus, both representing the NBI-center, have been in charge of the Danish-American research project.

“The condensed version is that it is possible to produce a material in which electrons behave like Majorana particles, as our experiments suggest – and that it is possible to produce this material by means of techniques rather similar to those used today when manufacturing computer circuits. On top of that we have shown how this material enables us to measure properties of Majorana particles never measured before – and carry out these measurements with great precision”, explains Fabrizio Nichele.

Two ultra thin sheets – combined in a ‘sandwich’ - are at the center of the Danish-American discovery, and it all has to do with producing a material based on this ‘sandwich’. 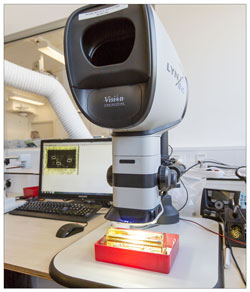 One of the optical microscopes available to the NBI-scientists. Photo: Ola Jakup Jensen

If you carve out a nano wire from this ‘sandwich’-layer it is possible to create a state where electrons inside the wire display Majorana-properties – and the theory behind this approach has in part been known since 2010, says Fabrizio Nichele:

“However, until now there has been a major problem because it was necessary to ‘grow’ the nano wire in special machines in a lab – and the wire was, literally, only available in the form of minute ‘hair-like’ straws. In order to build e.g. a chip based on this material, you therefore had to assemble an almost unfathomable number of single straws – which made it really difficult and very challenging to construct circuits this way”.

And this is exactly where the Danish-American discovery comes in very handily, explains Fabrizio Nichele: “We are now able to design the nano wire on a laptop – and include the details we go for. Further down the road production capacity will no doubt increase - which will allow us to use this technique in order to construct computers of significant size”.

Signature of a Majorana particle, shown on a screen. "The horizontal stripe in the center of the figure shows that a zero energy particle appears in a magnetic field in our devices - as expected for a Majorana particle", explains Fabrizio Nichele.

At Center for Quantum Devices at NBI, focus is very much on the construction of a quantum computer. Still it is a long haul - the quantum computer is by no means just around the corner, says Fabrizio 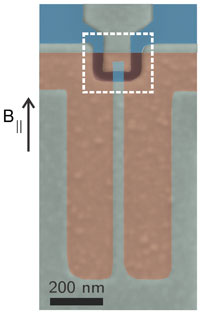 One of the nanowires central to the NBI-scientist's research. The wire is made out of aluminum. It is approx. 1/1.000 millimeter long, and 1/20.000 wide. Illustration: NBI

Nichele: “Materials with Majorana-properties obviously have a number of relevant qualities in this context – which is why we try to investigate this field through various experiments”.

Some of these experiments are carried out at temperatures just above absolute zero (-273,15 C), explains Fabrizio Nichele: “When you do that – which naturally requires equipment tailored for experiments of this kind – you are able to study details related to quantum properties in various materials. When it comes to constructing a quantum computer, Majorana-particles do, however, represent just one of a number of possible and promising options. This field is very complex – and when, some day, a quantum computer has indeed been constructed and is up and running, it may very well be based on some form of integration of a number of different techniques and different materials, whereof some may be based on our research”, says Fabrizio Nichele. 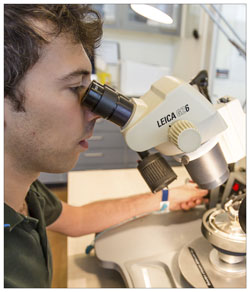 Scientists working with Ettore Majoranas equations for entirely other reasons than the desire to build a quantum computer, can also benefit from the Danish-American research, explains Fabrizio Nichele:

“Our technique makes it possible to conduct experiments that have up till now not been doable – which will also facilitate the understanding of the Majorana particle itself”.

The research project has been funded by the Danish National Research Foundation, the Villum Foundation, Deutsche Forschungsgemeinschaft (DFG) and – representing the commercial donor side – Microsoft; the latter joining the project as part of a well established cooperation with NBI.

In addition to cooperating with colleagues from Purdue Univcersity, the NBI-researchers have also recently studied Majorana properties working together with scientists from  University of California, Santa Barbara, USA. The results of this project are published in a separate article in Physical Review Letters.