The Star That Would Not Die:

Supernovae are the explosions of stars. They have been observed thousands of times and in all cases they marked the final death of a star. Now, astronomers have discovered a remarkable exception - a star that exploded multiple times over a period of more than fifty years. These observations are challenging existing theories on cosmic catastrophes. 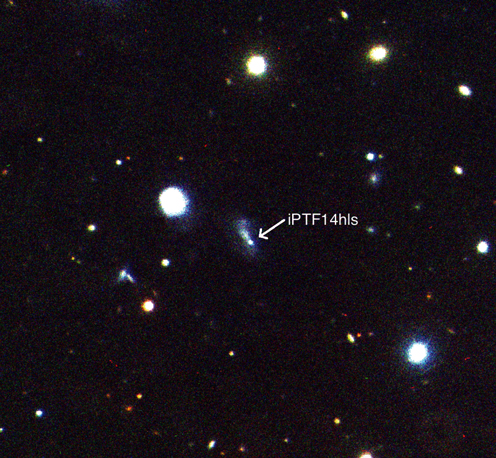 An image of iPTF14hls obtained with the Nordic Optical Telescope. Supernova iPTF14hls may be the first example of a "Pulsational Pair Instability Supernova". The first observation of a star that exploded multiple times, in this case over a period of more than fifty years. Credit: NOT, Stockholm University

When the supernova named iPTF14hls was discovered in September of 2014, it looked like an ordinary supernova. In fact, its spectrum showed that it belonged to the most common type of supernova explosions. Several months later, astronomers noticed something that they had never seen before - the supernova was growing brighter again after it had faded.

Observations collected by a large team of researchers, including Giorgos Leloudas at the Dark Cosmology Centre, Niels Bohr Institute at the University of Copenhagen, showed that iPTF14hls grew brighter and dimmer at least five times over two years. In contrast, a normal supernova rises to peak brightness and fades over 100 days. In addition, astronomers were astonished to discover evidence of an explosion in 1954 at the same location. This star somehow survived that explosion and exploded again in 2014.

An image taken by the Palomar Observatory Sky Survey reveals a possible explosion in the year 1954 at the location of iPTF14hls (left), not seen in a later image taken in 1993 (right). Supernovae are known to explode only once, shine for a few months and then fade, but iPTF14hls experienced at least two explosions, 60 years apart. Credit: POSS/DSS/LCO/S. Wilkinson.

The study of this peculiar event was led by Iair Arcavi, a NASA Einstein postdoctoral fellow at Las Cumbres Observatory and the University of California Santa Barbara. The resulting work was published in the journal Nature on November 8. Dr. Arcavi said, “This supernova breaks everything we thought we knew about how they work. It’s the biggest puzzle I’ve encountered in almost a decade of studying stellar explosions”.

Supernova iPTF14hls may be the first example of a “Pulsational Pair Instability Supernova.” This theory holds that massive stars become so hot in their cores that energy is converted into matter and antimatter. This would cause an explosion that blows off the outer layers of the star and leaves the core intact; this process can repeat over decades before the large final explosion and collapse to a black hole. But this explanation is not entirely satisfactory: such explosions were only expected to be seen in the early Universe, and should now be extinct. Witnessing such an explosion today would be as unlikely as discovering a living dinosaur! In addition, the energy released by the supernova is more than the theory predicts. Therefore, iPTF14hls may be something completely new.

A possible clue is provided by the nature of the galaxy the explosion occurred in - it is a small, primitive galaxy with few heavy elements, quite unlike the Milky Way. This supports the notion that the explosion came from a type of star we are unfamiliar with, because our own Galaxy is chemically enriched. However, the galaxy is also not as extreme as some of the more exotic models seem to require, says Dr. Dan Perley, Liverpool, who was a post-doc at Dark at the time of the study - lecturer at the Astrophysics Research Institute at the John Moores University in Liverpool.

iPTF14hls grew bright and dim again at least five times over two years. This behavior has never been seen in previous supernovae, which typically remain bright for approximately 100 days and then fade. Credit: LCO/S. Wilkinson

Some of the peculiar properties of this explosion, such as the excessive energy output, could be possibly explained if iPTF14hls was not spherical and we were observing it from a special viewing angle. For this reason, Dr. Leloudas, together with colleagues from Stockholm University, used the Nordic Optical Telescope, located in La Palma, Spain, to study the polarization of light from the supernova. “Light in nature is often polarized. We see that around us all the time, from the blue sky and the rainbow to the light reflected on the highway when we drive and the LCD screen in our smartphone. In astronomy and observations of supernovae, however, polarization is directly linked to how asymmetric the object is” explains Leloudas. “Unfortunately, the data showed that the supernova was almost spherically symmetric. Therefore the puzzle persists”.