Now we can find out where the heavy elements come from

The discovery of a kilonova produced by the collision of two neutron stars brings researchers a big step closer to the explanation of one of the great puzzles of science: how the heaviest elements in the universe were formed.

One of the world's largest telescopes, the VLT in Chile, picked up the light from the kilonova. Picture: ESO

"Finding out where the elements come from is an important part of our understanding of cosmic history. We now have a new tool," says Professor Johan Fynbo from DARK.

"Now we can study the kilonova in detail, and we can see that many elements are formed from the material that was ejected during the collision. We were not sure that these elements originated in this way, but now we know. Many of the elements that the Earth consists of are formed in kilonovae," says Daniele Malesani, who is a postdoc at DARK.

Niels Bohr Professor, Enrico Ramirez-Ruiz of the Niels Bohr Institute, too, is almost ecstatic about the result: "To me, the most exciting thing about this discovery is that it proves our idea that most of the heavy elements are created in the collision between neutron stars. For the first time in human history we are witnessing the formation of heavy elements like gold and platinum. "

Only three elements at the start

During the Big Bang only three of the many elements we know today were formed; the three lightest, hydrogen, helium and a little lithium. The rest of nature's elements came later, and for the past 100 years scientists have been struggling to figure out how it happened.

The majority of the lighter elements, up to iron with atomic number 26, can be formed by the fusion of lighter atomic nuclei in the interior of stars. Part of the heavier elements can also be explained by the fact that atomic nuclei in stars become heavier by adding neutrons, which turns them into new elements - the so-called slow or 's'-process.

Many elements can also be formed in supernovae, where massive stars explode. But the heaviest of the elements are quite difficult to form. It has not been easy to explain how we could get large amounts of heavy elements, such as the precious metals we can find on Earth today.

A popular theory suggests that the very heaviest elements are formed when neutron stars collide. Now astrophysicists have finally proved that such collisions actually occur, and analyses of the light from the kilonova tells a story of large amounts of heavy elements that have formed rapidly, in the so-called 'r'-process.

Some of the best data came from the Very Large Telescope (VLT) in Chile. One of the planet's largest telescopes with a 8.2-meter mirror was pointed at the kilonova every evening for more than two weeks.
The kilonova was so close to the Sun that it was only possible to observe it at dusk when the sun had just set, and only for one and a half to two hours. Fortunately, the weather was good most days, allowing observations. 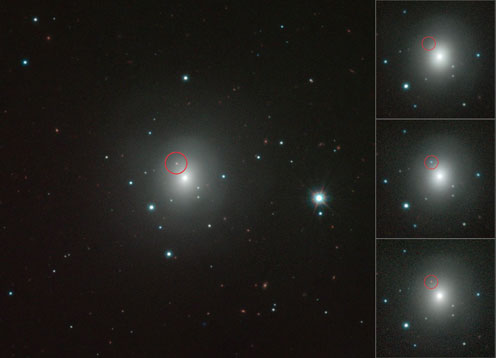 The astronomers could see how the kilonova went from being blue (to the right in the middle) to being red (bottom right). In older pictures (top right) it is not visible. Picture: ESO

Researchers from the Niels Bohr Institute helped interpret the large amount of data from the VLT, in particular from its X-shooter instrument. With X-shooter it is possible to split the light from celestial bodies into different wavelengths, and it gave astrophysicists additional information about what happened as the kilonova evolved.

"We started observing with VLT in the evening on August 18th and got the first data from X-shooter almost immediately. We had never seen anything like that before. We were amazed. It was a very unique spectrum, and initially we did not know how to start interpreting it, "says Jonathan Selsing, a PhD student at DARK. He was tasked to ensure that the analysis of the data from X-shooter was as good as possible.

From the first spectrum - a measure of how bright the object is at different wavelengths - researchers could calculate the kilonova size one and a half days after the collision between the neutron stars. At that point it was already around eight billion kilometers in radius, which meant that it had expanded at an enormous speed, one fifth the speed of light.

"We saw a radioactive fireball that exploded, expanding extremely quickly in every direction. It sounds like something from a science fiction movie, but it's actually what we observed, "says Darach Watson, an associate professor from DARK, who participated in the analysis of the light from the kilonova.

During the first couple of days, the kilonova changed color and went from being blue to becoming more red. In addition, its temperature decreased from about 8,000 degrees to about 5,000 degrees.

The scientists believe that the kilonova was initially blue because it was so extremely hot - just as the hottest stars are bluer in colour. Over time, it became redder, and researchers believe that the blue light disappeared because large amounts of newly formed elements absorbed it.

In principle, the near-infrared radiation could also come from hot dust, but that proposal is ruled out in a scientific article of which lecturer Christa Gall from DARK is the first author:

"We can rule out that dust formation is the explanation of the near infrared components of the light from the kilonova. We can not find any dust in the kilonova, so the near-infrared light is likely due to more heavy elements."

Traces of cesium and tellurium

Atoms consist of a nucleus of protons and neutrons, surrounded by a cloud of electrons. The heaviest atoms have many more neutrons in their nuclei, but in a kilonova there are plenty of free neutrons available. When the neutron stars collided, between three and five percent of the sun's mass of neutrons where blasted into space. Some of the neutrons decayed to protons and electrons, and the particles fused into atoms. 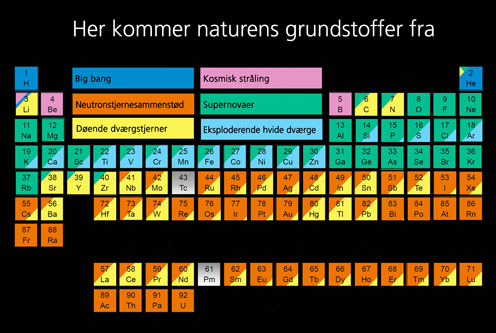 Exactly what elements were formed is extremely difficult to say from the data that astrophysicists have collected so far. Data will be analyzed for many months, so that the elements can be identified. But assistant professor, Giorgos Leloudas from DARK, was willing to speculate:

"Our theoretical analysis, based on our spectroscopic data, suggests elements formed by the r-process. Not all of them, but we think we see cesium, tellurium and maybe xenon. We do not have direct evidence of other elements, but they may show up in later analyses."

Looking at the periodic table, you can see that iodine lies between tellurium and xenon, and iodine is important to the body.

»Iodine is one of the elements that is mainly formed by the r-process. Therefore, a large part of the iodine found in our body was probably formed when two neutron stars collided, "says Jonathan Selsing.

It is not only precious metals and the more exotic elements we can thank neutron stars for, but also elements that are part of ourselves.

The element hafnium, with atomic number 72, is also one of the elements that can be formed in the kilonova. Hafnium got its name from Hafnia, the Latin for Copenhagen.The element was discovered in December 1922 by Dutch physicist Dirk Coster and Hungarian chemist George de Hevesy, who, at the request of Niels Bohr, studied special minerals at the Department of Theoretical Physics at the University of Copenhagen - which later became the Niels Bohr Institute.

Jens Hjorth, professor and head of Dark Cosmology Centre at the Niels Bohr Institute at the University of Copenhagen, Phone: +45 3532-5928, Email: jens@dark-cosmology.dk