Researchers from Niels Bohr Institute, University of Copenhagen, Denmark, studied satellite photographs of Lake Catalina, an ice-dammed lake in East Greenland – and were truly amazed: Unnoticed by science as well as people living in the area, the lake has been the source of four major outburst floods over the last 50 years - each representing an astounding mass of energy, equaling up to 240 Hiroshima-bombs! ”The next outburst is certainly building and may happen as soon as 2018-19”, says Aslak Grinsted, head of the research team.

If a glacier keeping back an ice-dammed lake starts leaking, the end result may be emission of almost unfathomable quantities of water in the form of an outburst flood.

For the last 200 years science has recorded a considerable number of outburst floods from ice-dammed lakes in mountainous regions all over the globe from Norway to USA, Iceland, Kyrgyzstan, Canada, Austria and Switzerland. In most cases it has been known in advance that an outburst was under way, prompting some state of alert in order to avoid loss of lives.

However, some of the biggest outburst floods ever recorded have remained unknown until recently. 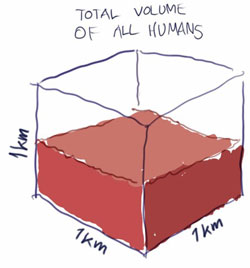 The outburst floods from Lake Catalina have a volume of 3 km3. That is six times the total volume of all humans. Illustration: Aslak Grinsted

These outbursts - a total of four taking place between 1966 and 2012 - originate from Lake Catalina, an ice-dammed lake on Renland, a 100 kilometer long island in Scoresbysund Fjord in East Greenland, located about 180 kilometer west of Scoresbysund settlement (Ittoqqortoormiit). And each of these outbursts has released in the order of 2.6-3.4 cubic kilometer of fresh water!

3.4 cubic kilometer of water is somewhat more than a shower – it equals 3.400 billion liter. Which, according to scientific reports covering the period from 1818 till present, has catapulted Lake Catalina into the top-5 rankings on the all-time-great-chart of registered outburst floods coming from ice-dammed lakes; surpassed only by outbursts in Argentina and USA with a thumping one - 5.400 billion liter from Hubbard Glacier in Alaska in 1986 - as the undisputed record holder.

All details regarding the Greenlandic mega outbursts will ‘go public’ via an article appearing in the upcoming issue of Scientific Reports.

The article is written by Dorte Dahl-Jensen, Christine Hvidberg and Aslak Grinsted - the three researchers from Centre for Ice and Climate at the Niels Bohr Institute who made the discovery – and Néstor Campos of Complutense University, Madrid, Spain, who assisted the Danish team in describing the phenomenon. 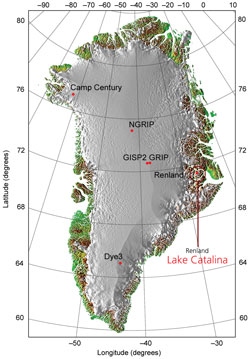 “These colossal outbursts from Lake Catalina were detected by mere chance”, admits assistant professor Aslak Grinsted, who led the study:

“We learned that a number of different satellites have taken photos of Lake Catalina over the last 50 years, from 1966-2016. These pictures are now freely accessible, and when we decided to take a look at them and soon after started to compare them systematically, they provided information about remarkable fluctuations in the water level of the lake”.

By analyzing data from the photographs the scientists were able to construct a model which – with some certainty – can predict when the next outburst flood from the lake can be expected to take place, explains Aslak Grinsted: “It is certainly building right now, and according to the model it will happen at the latest in 2023. However, it may occur as soon as next year, in the winter of 2018-19”.

The uncertainty surrounding the advent of the next mega outburst from Catalina Lake can be attributed to the rising temperatures experienced in Greenland and in the arctic regions these years due to global warming – increasing the melt down of glaciers and thereby making barriers keeping water ‘inboard’ in ice-dammed lakes leaking sooner than expected, explains Aslak Grinsted. 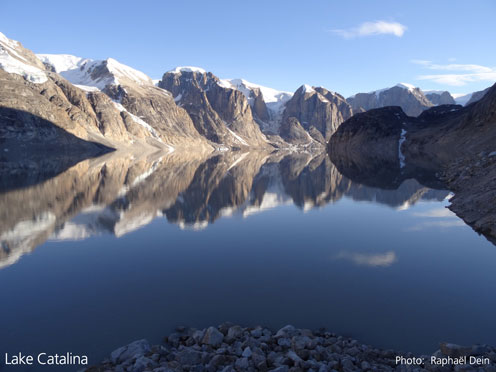 Seen from a distance, Renland’s ice cap – towering some 2.500 meter above Scoresbysund Fjord – almost creates the illusion that the rocky and steep-sided island is wearing white winter headgear.

Lake Catalina - named after the legendary American built amphibious aircraft used to carry out aerial mapping of Greenland during the 1950s – is situated 600 meter above sea level in a valley. Two smaller lakes further up the mountain feed it with water melting off Renland’s ice cap during the summer season – and feed it well, as Aslak Grinsted points out: 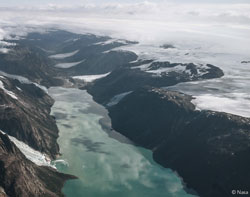 “It’s no pond – Lake Catalina is about 10 kilometer long and on average two kilometer wide, and in some parts it may well be hundreds of meter deep. To the best of my knowledge, the depths have never been systematically charted – though a number of expeditions have visited the lake over the years, some have even sailed on it, with a French expedition in the summer of 2016 being the latest”.

“The same lack of certainty seems to exist when we are talking about possible wild life in Lake Catalina - but the biological part is not something my colleagues from NBI and I will go into, we have our ha nds full trying to understand in more detail what dynamics lie behind the outburst floods”.

As far as the depths of the lake are concerned, the NBI-scientist do, however, have some knowledge - thanks to the very satellite photograhs they analyzed, Aslak Grinsted explains: “When you start examining these photographs – the oldest, those from 1966, were taken by Corona KH 4-A, a US spy-satellite active from 1963-69 – you suddenly realize that the water level in Lake Catalina can fluctuate so markedly that you almost get the impression it is in free-fall. It may fluctuate up to 150 meter – which is a lot of water considering that the lake’s surface measures around 20 sq. kilometer.

Lake Catalina receives melt water from Renlands ice cap. The top of the ice cap is 2.500 meter above sea level. The melting – and the filling up of Lake Catalina – takes place during the summer. When the water reaches a certain level in Lake Catalina, Edward Bailey Glacier can no longer hold it back – and an outburst flood is a reality. Illustration: Aslak Grinsted.

After having studied a couple of ‘before-and-after’ photographs of fluctuations of that magnitude, I started wondering: How did all of that water escape Lake Catalina over a very short period of time – and what are the dynamics behind these outbursts? And that was when we decided to take a closer look at the phenomenon”.

Lifting up the glacier

A glacier measuring 40 kilometer in length, named in honor of the British geologist Sir Edward Bailey (1881-1965), is the ‘cork’ which – most of the time – bars melt water originating from Renland’s ice cap from streaming continously out of Lake Catalina. The glacier’s lower end, it’s tongue, almost meets Scoresbysund Fjord - which is where the enourmous amount of water is finally led out when Lake Catalina cannot hold back any longer, tells Aslak Grinsted: 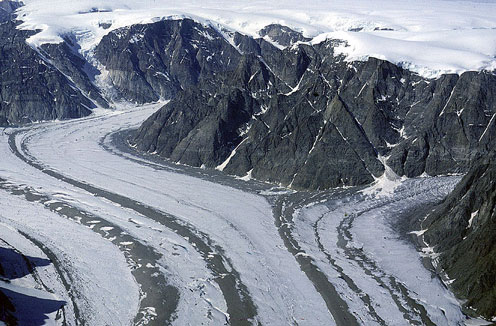 The Edward Bailey Gletscher at East Greenland. The glacier is flowing towards the bottom of the picture. Credit: Michael John Hambrey

“The dynamics behind these outburst floods seem to be connected with water pressure in Lake Catalina. What happens is probably that when the water level in the lake reaches a certain high due to sustained influx , the pressure on the glacier below will be so pronounced that it cannot any longer function effectively as a ‘cork’ – which in turn will cause water to start flowing under the glacier and thereby lifting it. Our model shows that following this, the water from the lake will – at some point – start melting its way through Edward Bailey Glacier - and thereby in reality ‘drill’ a tunnel which will function as a drainpipe”.

This drainpipe will lead the water from Lake Catalina into Scoresbysund Fjord, says Aslak Grinsted: “And if you look at the mass of energy released in the entire process, we are really talking big numbers – because the energy behind an outburst flood releasing in the order of 3.4 cubic kilometer fresh water actually equals 240 atomic bombs of the type the Americans dropped over Hiroshima during World War II! And that is enough energy to ‘drill’ a 20 kilometer long tunnel with a diameter of 55 meter straight through the Edward Bailey Glacier”.

What happens when so much water is lead out into Scoresbysund Fjord over just a few months? “That is a so-called good question”, says Aslak Grinsted:

“We asked people who live in Scoresbysund – in Ittoqqortoorniit – whether they remember noticing anything unusual during the four outburst floods we now know have taken place between 1966 and 2012, and everybody said “no” - which probably means that the floods did not, for instance, cause the water level in Scoresbysund Fjord to rise notably.

Whether these outburst floods can somehow influence ocean currents along East Greenland is another aspect – and it is open for speculation, because at this point we simply don’t know the answer”. 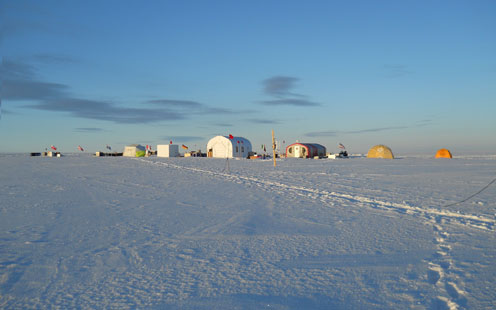 The Centre for Ice and Climate drilled an Ice Core on the Renland ice cap in 2015 as part of the RECAP project. Photo: Sune Olander Rasmussen

Aslak Grinsted and his colleagues from the Niels Bohr Institute want to examine the outburst floods from Lake Catalina further, and they have come up with a number of ideas to do just that, he says:

“Right now a new outburst is building in the lake – and based on our observations we can see that over the period from 1966 to 2012 the intervals between these outbursts from Lake Catalina have shortened concurrently with the rising temperatures in the arctic regions”.

“However, this shortening of intervals between outburst floods is hardly specific for Lake Catalina. We are seeing a global increase in temperatures these years - and what we have documented in Scoresbysund Fjord therefore might indicate that ice-dammed lakes all over the world are in the process of becoming more unpredictable and potentially more dangerous because outbursts and flooding can occur at shorter notice than historically experienced. By following Lake Catalina closely one might hope to get information which can be utilized when monitoring ice-dammed lakes all over the world, and we will now try to secure funding for further research”.

The scientists plan to attach a considerable number of GPS based instruments to the Edward Bailey Glacier – in order to monitor all movements in this 40 kilometer long mass of ice. Additionally they want to set up cameras in order to document the next outburst flood from Lake Catalina – and to chart in detail the depths of the lake.

Since 1988 the Niels Bohr Institute has been conducting research on the northern end of Renland – where a number of ice core drillings have taken place. However, the scientists behind the new research have not yet visited Lake Catalina, Aslak Grinsted says:

“We only know the lake from the satellite photographs – so going there would be really exiting. Imagine actually sailing on it”.

A plane that made it’s mark