Unexpected rotation in a stone-dead galaxy

A joint European-US study led by experts from Niels Bohr Institute (NBI) at University of Copenhagen, Denmark, reveals a rotating stellar disk à la the Milky Way in a stone-dead galaxy 10 billion light-years from Earth. This has never been shown before. The galaxy examined is an early version of elliptical-shaped galaxies. 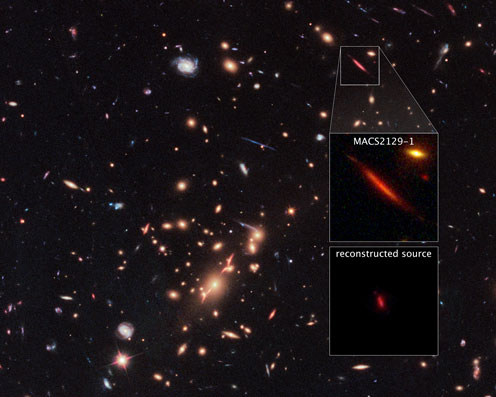 Acting as a “natural telescope” in space, the gravity of the extremely massive foreground galaxy cluster MACS J2129-0741 magnifies, brightens, and distorts the far-distant background galaxy MACS2129-1, shown in the top box. The middle box is a blown-up view of the gravitationally lensed galaxy. In the bottom box is a reconstructed image, based on modeling, that shows what the galaxy would look like if the galaxy cluster were not present. The galaxy appears red because it is so distant that its light is shifted into the red part of the spectrum.

The finding is remarkable, as this pattern of stellar rotation in a dead galaxy strongly contradicts prevalent astrophysical theory regarding the formation of elliptical-shaped galaxies shortly after the Big Bang 13.7 billion years ago.

The galaxy has been named MACS2129-1, and the upcoming issue of the journal Nature will run a scientific article describing how the researchers detected the galaxy and how they managed to unravel some of its secrets.

“MACS 2129-1 is three times heavier than the Milky Way, our own galaxy – but only half the size. So MACS2129-1 is extremely compact”, says study leader Sune Toft, astrophysicist at Dark Cosmology Centre at NBI in Copenhagen.

‘Speed limits’ also seem to differ somewhat between MACS2129-1 and the Milky Way, Sune Toft adds: “We were able to establish that the stars in MACS2129-1 rotate in circles around the center of the galaxy at a speed of over 500 km per second, more than twice as fast as stars rotate in the Milky Way”.

Galaxies are stellar systems in space and astronomers distinguish between two main types: disk-shaped spiral galaxies, e.g. the Milky Way, and elliptical-shaped galaxies. One of the distinct differences between the two main types being that while the disk-shaped galaxies still make new stars by transforming gas, the elliptical-shaped stopped doing this long ago – which is why the latter are deemed ‘dead’.

Furthermore the stellar motions differ markedly between the two main types: In the Milky Way and in other disk-shaped galaxies stars rotate with a regularity that is predictable – whereas stellar motion in elliptic-shaped galaxies can be seen as rather more chaotic, says Sune Toft: “Here the stars seem to be all over the place, to move in all directions. And that was what we expected to find when we took a closer look at MACS2129-1”.

Why elliptic-shaped galaxies stopped producing new stars way back in the history of the universe has long puzzled astrophysicists. The prevalent theory speculates that collisions between galaxies in some cases may have provoked a sort of over-production in certain galaxies – because all available gas was compressed in their center and transformed to new stars. Whereupon these elliptical-shaped galaxies ceased stellar production – and ‘died’.

With MACS2129-1, however, things are different. Albeit it can be said with certainty that the galaxy is not producing new stars – and therefore can safely be considered stone-dead – its existing stars are nevertheless distributed in a rotating disc. Exactly as can be seen in the Milky Way! 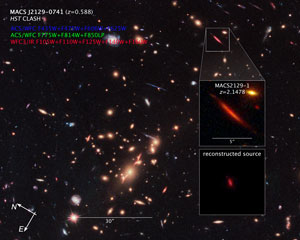 Can this atypical system of stellar rotation observed in MACS2129-1 be interpreted as a form of ‘prototype’ representing an early stage in the development of elliptic-shaped galaxies?

“Not at this point”, says Sune Toft: “Before we can approach an answer to that question we have to study other ‘dead’ elliptic-shaped galaxies of the same age – and we have started this work”.

Sune Toft and his collaborators had access to the Hubble-telescope in space as well as the Earth-based Very Large Telescope (VLT) in Chile – yet they struggled to get information about MACS2129-1.

In the end success was secured by the fact that the stone-dead galaxy was positioned behind a foreground cluster of other galaxies – a cluster which functioned as a ‘natural lens’ by amplifying as well as enlarging the image of MACS2129-1. And that made it possible for the researchers via Hubble and VLT to study in detail the distribution of stars in the galaxy as well as the patterns of stellar rotation, says Sune Toft: “Thanks to the natural lens we were able to to gaze into the core of this galaxy, which would otherwise have appeared not much larger than a star to our telescopes.

Further studies of the cosmological origin of elliptic-shaped galaxies will figure prominently when Cosmic Dawn Center opens later this year. This research centre – financed by Danish National Research Foundation with a grant of 66 million DKR – will be jointly run by NBI and DTU Space, a faculty of Technical University of Denmark (DTU), with Sune Toft appointed scientific director.

The telescope which is much stronger than Hubble - its predecessor – will operate in a very cold and dark environment ideal for conducting observations, says Sune Toft:

“The Webb-telescope is designed to detect infrared light from the very first stars and galaxies. In theory it will make it possible for scientists to study what happened when the elliptic-shaped galaxies formed – and when they died. And because scientists from both NBI and DTU Space helped build some of the instruments on board the James Webb Space Telescope, Cosmic Dawn Center is guaranteed fast access to the telescope once it is in orbit”.

The European Research Council (ERC), set up by the EU in 2007, is the prime European funding organisation for excellent frontier research. Every year, it selects and funds the very best, creative researchers of any nationality and age, to run projects in Europe. The ERC has three core grant schemes: Starting Grants, Consolidator Grants and Advanced Grants. The ERC is part of the 'Excellent Science' pillar of the European Union's Horizon 2020 programme.

This artist's concept shows what the young, dead, disk galaxy MACS2129-1, right, would look like when compared with the Milky Way galaxy, left. Credits: NASA, ESA, and Z. Levy (STScI) 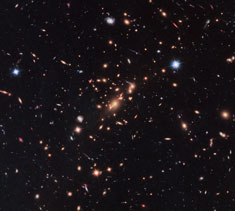 A wider view of galaxy cluster MACS J2129-0741, located in the constellation Aquarius.