In recent Earth history, climate has varied following ~100,000 year, glacial-interglacial cycles with higher and lower temperatures and greenhouse gas concentrations. During the coldest glacial conditions, global mean temperatures were about 5 °C cooler than present with about half as much carbon dioxide in the atmosphere.

These cycles were paced by variations in the Earth’s orbit but there is still limited understanding of the types, sizes and timings of the specific processes that led to the temperature and greenhouse gas changes. 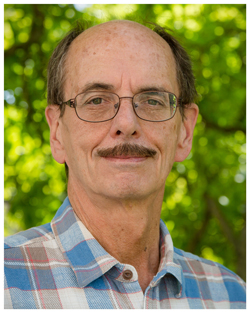 Gary Shaffer is professor emeritus in the research group Climate and Geophysics at the Niels Bohr Institute, University of Copenhagen.

A data analysis/ Earth system modelling study just published in PNAS (Proceedings of the National Academy of Science of the United States of America) shows that dust input to the atmosphere and ocean increased exponentially with decreasing temperature and that this enhanced input amplified global cooling and carbon dioxide drawdown during coldest glacial conditions.

As explained by Professor Gary Shaffer (University of Magallanes (Chile), and Niels Bohr Institute, University of Copenhagen) who led the study, this “supplies an important piece to the glacial-interglacial climate cycle puzzle and underlines the important role of dust in the climate system”.

The study used dust deposition data over the last three glacial cycles from subtropical latitudes in the Northern Hemisphere and high latitudes in the Southern Hemisphere, hotspots for the atmospheric cooling and ocean fertilization effects, respectively, and found the exponential dependencies on temperature mentioned above. Simulations with the Danish Center for Earth System Science (DCESS) model showed the amplified cooling and carbon dioxide decrease for the coldest glacial conditions (see figure below): 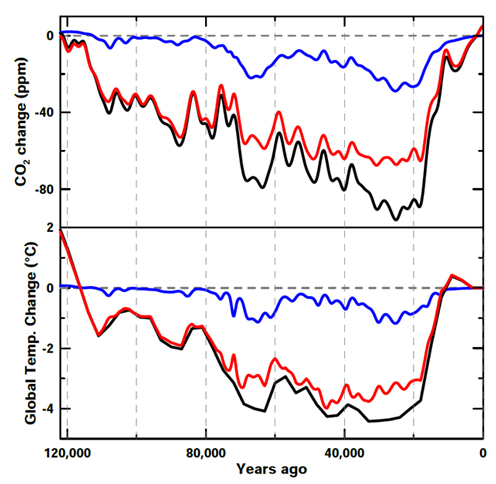 Black lines are observations/reconstructions, blue lines are simulated dust-driven effects and red lines are residuals after subtraction of these effects; changes are relative to pre-industrial conditions.

These results show that dust-climate feedbacks can explain the final push into extreme glacial conditions for both temperature and carbon dioxide, thereby explaining around one fourth of the total interglacial-glacial change for both properties.

Professor Shaffer notes that “Our results show a very strong positive cooling feedback for coldest glacial conditions. Cooling leads to dryer conditions and more dust whereas more dust leads to more cooling. But other processes must step in at extreme glacial conditions to reverse this trend. Otherwise the Earth would ice over as has happened in ancient Earth history. Here again dust may play a role. More dust deposition on Northern Hemisphere ice sheets would make them less reflective to solar radiation and melt faster. This in turn would decrease cooling, both from less reflectivity and smaller ice sheet size. We intend to address this in future work”.

Fabrice Lambert (Catholic University, Santiago) was the co-author of this study that was supported by grants from the (Chilean) Millennium Science Initiative and (Chilean) National Fund for Scientific and Technological Development.