Hubble searches for the origin of the first galaxies

How did the first galaxies come to be? The Buffalo project, a new Hubble Frontier Fields Program to study the first galaxies with the The Hubble Space Telescope has started to conduct a large survey which will be completed over the coming year. Charles Steinhardt from the Cosmic Dawn Center, Niels Bohr Institute, University of Copenhagen, is leading the project, which brings together over 100 researchers from 18 countries and five continents. 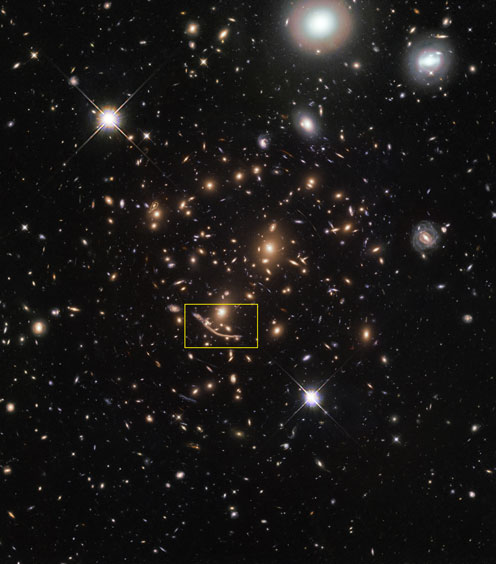 Hubble Space Telescope observations of the massive Abell 370 Cluster and surrounding galaxies (BUFFALO Collaboration).  Galaxies closest to the center are distorted and magnified due to gravitational lensing.[CS1]   BUFFALO will use this and similar observations over the next year to investigate the formation of the first galaxies in the Universe and the subsequent evolution of massive clusters of galaxies, as well as map and explore the dark matter distribution within these massive clusters.

The researchers will be studying the earliest stages of formation of the first galaxies that formed (less than 800 million years after the Big Bang, when the Universe was just 6% of its current age) in order to shed light on the processes by which galaxies first assemble.  In total, Hubble will spend over 100 orbits of the Earth, or approximately 160 hours, on the BUFFALO project, making BUFFALO the largest current galaxy evolution study with Hubble.

Gravitational lensing makes it possible to see the most distant galaxies

This new project builds off one of the largest and most successful Hubble initiatives to date, the Frontier Fields, which has pushed our view back in time to only 435 million years after Big Bang.  This joint effort from NASA’s Great Observatories, combined with the immense gravity from six massive clusters turning them into “natural telescopes”, allowed the discovery of galaxies so distant and faint that they could not be imaged by Hubble alone. The large mass of the galaxies, mainly composed of the so-well ‘unknown’ dark matter, magnifies and distorts the light coming from distant galaxies as it goes through them, thanks to an effect called gravitational lensing. This extra magnification from gravitational lensing makes it possible to study galaxies so distant that Hubble would otherwise be unable to see them.  Galaxies discovered in the Frontier Fields have then been studied by every major telescope in the world, including the Spitzer Space Telescope and Chandra Space Telescope. 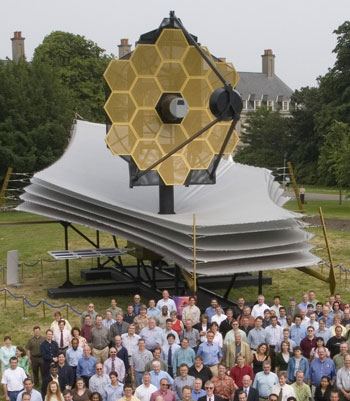 BUFFALO and the James Webb Telescope

BUFFALO will expand the region of Hubble observations around these clusters.  One of BUFFALO’s key goals is to determine how rapidly galaxies formed in the first 800 million years after the Big Bang in order to design strategies for using the upcoming James Webb Space Telescope, at DKK 62 billion the most expensive scientific research facility ever built, which is scheduled to launch in 2021 the exploration of the first galaxies as a primary mission.  The new Cosmic Dawn Center at the Niels Bohr Institute and DTU Space was constructed in order to take full advantage of the new studies JWST will make possible and the major Danish contributions to building its instruments.

Statistical uncertainty = a lot of legwork for astronomers

Although the Frontier Fields have already discovered some of these first galaxies, our understanding of the early universe is limited by a statistical uncertainty known as cosmic variance.  Every galaxy began its life as a random density fluctuation shortly after the Big Bang.  Regions with a little bit of extra mass had a stronger gravitational pull, and eventually grew into all of the structures that we see today.  However, the regions with the largest fluctuations, which are thought to have formed the first galaxies, are believed to have been related, so that the first galaxies are grouped together.  Therefore, a proper census of the first galaxies requires sampling as wide of an area as possible. This is in order to make sure to include both some of the rare regions with many of these early galaxies and the far more common regions that had not yet been able to form galaxies so quickly.

BUFFALO – an efficient collaboration between telescopes 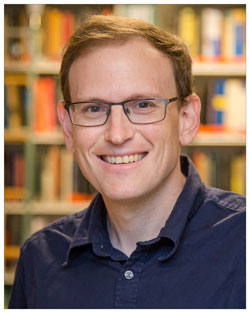 Charles Steinhardt, Assistant professor at the Cosmic Dawn Center (DAWN) is head of the BUFFALO program.

Because Frontier Fields observations have already established what the first galaxies look like, BUFFALO will be able to find these galaxies approximately ten times more efficiently than the original Frontier Fields.  It will also take advantage of observations from other space telescopes, including ultra-deep Spitzer Space Telescope observations that already exist around these clusters.  “Spitzer has a larger viewing area than Hubble, so considerable time on Spitzer and other large telescopes has already been invested in expanding the area around the Frontier Fields.”, said Charles Steinhardt of the Cosmic Dawn Center at the Niels Bohr Institute, who is leading the project.  “By filling in the region of these additional observations with Hubble, we can immediately make use of not just one but several of these telescopes.”

However, reconstructing information about Frontier Fields galaxies is an arduous task, because we do not have the blueprints for these natural telescopes. The first step is making as detailed a map of these massive clusters as possible in order to measure exactly how much magnification they provide.  “By expanding the area that we map around each of these clusters, we will significantly improve our estimate of the clusters’ magnification, mandatory step for studying the distant galaxies that BUFFALO will discover.”, said Mathilde Jauzac of the University of Durham, co-leader of the project who is leading the dark matter mapping of these lenses.  “Plus, BUFFALO will allow us to map precisely the distribution of dark matter in these massive clusters, and thus trace their evolution history, a missing information in today’s evolution theories.”

Data from BUFFALO will be made available immediately to the entire astronomical community, and the first results will be published later this year.