Scientists from the Niels Bohr Institute, University of Copenhagen, have been involved in detecting a beam of light that provides a link between neutron star mergers and short duration gamma ray bursts. The result is now published in Nature Astronomy. 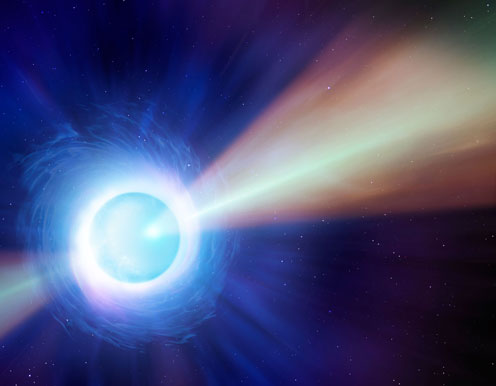 Neutron stars are small, but extremely dense objects, only tens of kilometers across, but with the mass of a star. When they collide or merge, they produce enormous amounts of energy. It has been believed for some time that they are responsible for short bursts of gamma rays, a celestial phenomenon first discovered in the 1960s by cold war nuclear monitoring satellites. This new finding establishes that link much more clearly, and opens the way to use the hundreds of known short gamma ray bursts to study the mergers of neutron stars – so far, very rare phenomena.

What exactly is a “short duration gamma ray burst”?

Gamma ray bursts, we know now, are the signatures of extremely violent merger of two neutron stars. A quick burst of gamma rays is emitted milliseconds after the collision, and the bursts are observable from Earth. Hundreds of bursts have been detected to date, but it hasn’t been possible to conclusively link the observations to a source. The present study has used a now famous celestial event in 2017, to link such a burst to the merger of a neutron star. It made headlines when the gravitational wave event of 17 August 2017 – hence the name GW170817 – became the first gravitational waves to be positively identified with an astrophysical source — a neutron star merger. In ongoing investigations of the event, a team of scientists, including members from the Niels Bohr Institute, continued to monitor the source, and were rewarded with the first, confirmed sighting of a jet of material, the afterglow, still streaming out from the event.

The traces of a massive collision

The gravitational wave detection provides a wealth of unprecedented data: the masses of the merging objects, how they spin, the final mass of the merged remnant. However, light emitted at different frequencies from the event is also critical to understanding the merger. And there are two different sources of light, each of which provides unique information. The first is the prompt emission of high energy radiation lasting only milliseconds, which comes out immediately – in this case 1.7 seconds after the gravitational wave signal – the gamma ray burst. The second, the kilonova, emerges in the subsequent days, and has a much slower emission of optical and infrared light, which rises, and then fades. Currently, this is believed to be a radioactive fireball of ejected matter from the neutron star merger. GW170817 produced a gamma ray burst believed by some to have been dim because the earth was off the main axis. This study shows that the merger did indeed launch a jet, which we observed off-axis, and which was distinguishable from the optical light from the kilonova. This was done by detecting visible light from the afterglow months after the merger, characteristic of jet emission rather than kilonova emission. This provides the link between the jet-driven short gamma ray bursts and a neutron star merger. So now, the framework for understanding both GW170817 and hundreds of formerly “homeless” observations of short duration gamma ray bursts is far better established.

Of particular interest is the question of the origin of the heaviest elements, which is still a matter of serious debate among scientists, with many now believing that the rare earth elements, as well gold and platinum, are created in these mergers and scattered into the universe. While the signature of such elements has yet to be clearly identified, as a result of this study, it may now be possible to get a better census of the number of neutron star mergers happening in the universe by using short gamma-ray bursts. Statistics for this much larger group of events may make it possible to work backwards and perhaps establish the properties of neutron star mergers as a whole.

Jens Hjorth, Johan Fynbo, Christa Gall, Bo Milvang-Jensen, and Darach Watson of the Niels Bohr Institute were involved in the publication, and their work supported by the Villum Foundation and the Carlsberg Foundation.