Researchers have spotted an enormous, dusty star-forming galaxy 13 billion light years away from Earth, making it the farthest of its type ever measured without the aid of a gravitational lens. The galaxy, named Mambo-9, was discovered using the ALMA telescope in a collaboration among an array of international universities, the University of Copenhagen and DTU. 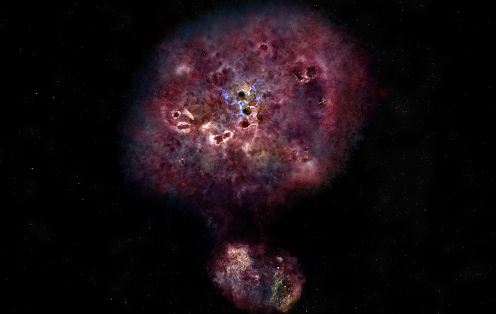 An international team of researchers has spotted a giant galaxy composed of a large number of stars, gases and stardust. At 13 billion light years away, it is the most distant dusty star-forming galaxy ever to have been seen directly. The research results are now published in Astrophysical Journal.

“Dusty galaxies produce large numbers of stars and play an important role in the shaping of our universe. However, because dust interferes with light emanating from them, they are impossible to see with regular telescopes,” according to Sinclaire Manning, a doctoral student writing her dissertation about the study and Guest Researcher at the Cosmic Dawn Center (DAWN). The basic research center is located at the University of Copenhagen’s Niels Bohr Institute and DTU-Space.

Dusty star-forming galaxies are the most intense star producers in the universe. They form stars at a rate up to a few thousand times the mass of the Sun every year, whereas the star-forming rate of our Milky Way is only three solar masses per year.

Even though the Mambo-9 galaxy was first discovered 10 years ago, only now has its distance from Earth been measured. This has been achieved using the ALMA telescopes, that are able to precisely measure galaxies like Mambo-9, in which incredibly large amounts of star-forming gases and dust keep them hidden from view.

Galaxy at verge of Big Bang

Images of distant galaxies taken by researchers reveal the appearance of galaxies as they were billions of years ago, as it takes that long for their light to reach the lenses of telescopes. Consequently, the images of Mambo-9 depict a galaxy as it was 13 billion years ago, which verges on the moment when the Big Bang occurred, 13.8 billion years ago.

“That we have been able to observe this type of galaxy, so near the Big Bang, is a fantastic achievement. We are surprised that a 13 billion-year-old galaxy is so large and massive so shortly after the Big Bang. Because, how could a galaxy get so big in such a short time?” reflects Astrophysicist Georgios Magdis, an associate professor at the Niels Bohr Institute and DTU-Space.

The researchers have calculated that the galaxy is even bigger now and most likely contains hundreds of times more stars than the Milky Way.

“This distant galaxy offers a snapshot of a galaxy’s infancy, shortly after the Big Bang. It is highly likely that a lot has happened within this galaxy over the past 13 billion years. What we are able to see is a galaxy full of dust and gas, one that is ready to produce billions of stars. Later in its life, it will most likely be one of the most star producing galaxies in the universe,” says Georgio Magdis.

Big and full of dust

In the study, the telescope was aimed towards a very dark area of the sky to investigate how many dusty galaxies it could find in the primordial universe. Mambo-9 is the first galaxy to be selected for closer inspection.

“The next step will be to characterize the remaining dusty star-forming galaxies that the ALMA study is discovering. We expect discover more galaxies that contain just as much dust and gas, and are just as far off – or perhaps even further away,” says Sinclaire Manning.

ALMA (Atacama Large Millimeter/submillimeter Array) is operated by the European Southern Observatory (ESO) and a consortium of international partners. It is a state- of-the-art telescope that studies light from some of the coldest objects in the universe. It observes electromagnetic radiation between infrared light and radio wavelengths at millimeter and submillimeter wavelengths. ALMA consists of 66 precision antennas spread out over an area of up to 16 kilometers. The global partnership is the largest terrestrial-based astronomy project.

The Cosmic Dawn Center (DAWN) is an international basic research center funded by the Danish National Research Foundation. It is dedicated to uncovering how and when the first galaxies, stars and black holes formed. DAWN is located in Copenhagen at the Niels Bohr Institute, University of Copenhagen, and at the National Space Institute of the Danish Technical University (DTU-Space).