University of Copenhagen physicists, as part of the University and Microsoft collaboration focused on topological quantum computing, may have unloosed a Gordian knot in quantum computer development. In partnership with researchers from University of Chicago, ETH Zurich, Weizmann Institute of Science, and fellow Microsoft Quantum Lab collaborators at Purdue University, they have designed and realized a promising building block for supercomputers of the future: a two-dimensional platform for that could lead to quantum bits that are both stable and able to be mass produced. 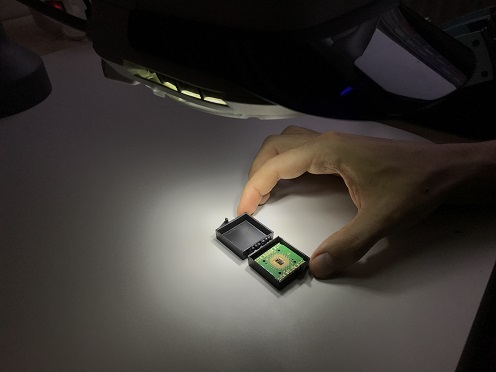 Led by two young physicists, Antonio Fornieri and Alex Whiticar, under the supervision of Professor Charles Marcus, Director of Microsoft Quantum Lab Copenhagen, researchers at the Center for Quantum Devices (QDev) a Center of Excellence sponsored by the Danish National Research Foundation at the Niels Bohr Institute, University of Copenhagen, designed, built, and characterized a key component that could cut a Gordian knot in the development of viable quantum computers - specifically, the building block for a quantum bit, or qubit, that is both protected from disturbances and able  to be mass produced. Their results have just been published in the scientific journal, Nature.

Together with a back-to-back publication from a team at Harvard University on a related system, the Copenhagen team was able to demonstrate Majorana zero modes in the one-dimensional semiconductor gap between two superconductors forming a spatially extended Josephson junction, an effect predicted theoretically by teams at Harvard-Weizmann, and Niels Bohr Institute-Lund University.

The wide Josephson junction is part of a complex chip of hybrid superconductor and semiconductor materials grown by Michael Manfra’s Microsoft Quantum Lab group at Purdue. It is anticipated to be an important component in the development of topological quantum information. The discovery unlocks a range of possibilities for researchers. "A major advantage of the discovered component is that it can be mass produced. We can design a large and complex system of quantum bits on a contemporary laptop and have it manufactured using a common production technique for ordinary computer circuits," says co-lead author Postdoctoral Fellow Antonio Fornieri.

From handcraft to mass production
Majorana quantum states are the foundation for the quantum computer being developed by a combination of University students, PhDs and postdocs, and Microsoft employees pursuing collaborative research at Microsoft Quantum Lab Copenhagen at the Niels Bohr Institute. The Majorana quantum state has an important property that protects it from external disturbances, in principle enabling longer periods of quantum processing compared with other types of quantum bits. One of the greatest challenges for researchers worldwide is to develop qubits that are stable enough to allow a computer to perform complicated calculations before the quantum state disappears and the information stored in the bits is lost.

In the past decade, Majorana particles have been created in the lab using semiconductor nanowires connected to superconductors and placed in a large magnetic field. Nanowires are not well suited for scale-up to a full-blown quantum technology because of the laborious assembly required to manipulate microscopic threads with a needle, move them individually from one substrate to another, and then secure them into a network. Given that a quantum computer will likely require thousands or more bits, this would be an exceptionally difficult process using hand-placed nanowires. Furthermore, nanowires require high magnetic fields to function. The new Josephson junction-based platform replaces the nanowires with a two-dimensional device which requires lower magnetic fields to form the Majorana states.

Promising structure
"Our prototype is a significant first step towards using this type of system to make quantum bits that are protected from disturbances. Right now, we still need some fine-tuning – we can improve the design and materials. But it is a potentially perfect structure," asserts Fornieri.

The two-dimensional system has another important quality according to research group member Alex Whiticar, a doctoral student: "Our component has an additional control parameter, in the form of the superconducting phase difference across the Josephson junction that makes it possible to simultaneously control the presence of Majorana-states throughout a system of quantum bits. This has never been seen before. Furthermore, this system needs a much lower magnetic field to achieve Majorana states. This will significantly ease the manufacturing of larger quantities of quantum bits."

Charles Marcus adds, “Moving from one dimensional nanowires into two-dimensional hybrids opened the field. This device is the first of many advances that can be anticipated once topological structures can be patterned and repeated with precision on the 10nm scale. Stay tuned.”

As summarized by Michael Manfra, “The close collaboration between the Microsoft Quantum Laboratories has resulted in a promising new platform for the study and control of Majorana zero modes. It is exciting that this approach is potentially scalable.”