Bengt Strömgren contributed key new ideas about energy production in stellar interiors up until the start of the Second World War. He was called the ace of the conference at a special meeting in 1938 between the greatest theoretical physicists and astronomers - a meeting, which at the last moment gave life to the so-called CNO-process, which explains the production of nuclear energy in stars.

The conference in Washington, 1938, brought physicists and astronomers together and the two fields inspired each other at the interdisciplinary meeting. Included in the photograph are George Gamow, Donald H. Menzel, Hans A. Bethe, Edward Teller and Nobel laureate Subrahmanyan Chandrasekhar. (source: Rebsdorf 2005, s. 290).

Strömgren's results of a high abundance of hydrogen in stars contributed to the understanding of stars' evolution as gigantic 'hydrogen burners', which convert enormous amounts of hydrogen to radiation. The question was simply how this happened and a dedicated group of astronomers did everything in their power to assert the importance of solving the energy problem.

A divide in Washington 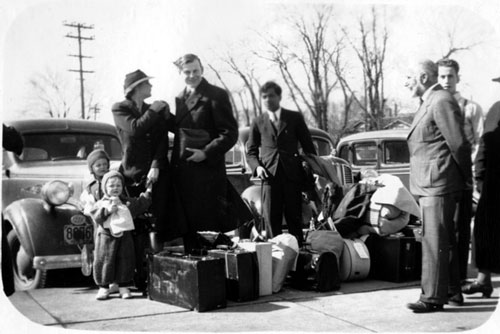 Bengt Strömgren says goodbye to his colleagues at Yerkes Observatory, before he travels back to Denmark. His colleague, Subrahmanyan Chandrasekhar, travelled with the Strömgren family, as he, like Bengt Strömgren, had been invited to the important meeting in Washington. This was Bengt Strömgren's last stop in the US before he returned to his native land for a number of years.(source: Rebsdorf 2005, s. 284).

The essence of Bethe´s theory was that four protons in one star fused into helium nuclei through a cyclical process in which carbon works as a catalyst (the CNO process). It later turned out that this process did not apply to the Sun, where the temperature is not high enough, but the process holds for stars that are heavier than the Sun. In the Sun it is the so-called proton-proton-process at work which was also introduced by Hans Bethe. This contribution was later recognized as fundamental for all later work in the area of nuclear energy production - and Bethe received the Nobel Prize in Physics in 1967.

Bengt Strömgren had come a long way with his many colleagues around the world. They could in principal calculate the temperature of a star, its radius, luminosity, and the internal structure. Now that the energy production as a result of the fusion of the light elements had fallen into place, Strömgren was closer to his goal, to increase man's knowledge of the Galaxy's (that is to say the Milky Way's) physical components and his theory about the predominance of the light elements in the stars and perhaps even the Universe was confirmed. 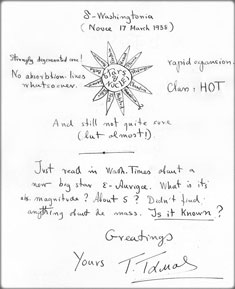 Gamov was known his humoristic letters and in an invitation letter to the Washington conference in 1938, the Indian astronomer Chandrasekhar received this drawing. Gamov used the Greek symbol terminology in his promotion of the "new star delta-Washingtonia", which was "discovered" in March 1938. In the rays of the star, the names of the invited guests can be seen, including Albert Einstein, who did not take part in the meeting. Gamov wrote under this using Greek symbols. (source: Rebsdorf 2005, s. 287).
View letter enlarged >>