A universe of hydrogen

His theory about the abundance of hydrogen of the stars was Bengt Strömgren's international breakthrough. An article by Bengt meant international recognition and he was soon recruited to the University of Chicago, where, until World War II, he worked closely with the greatest astronomers of the time, including Nobel laureate Chandrasekhar.

Towards the end of the 1920s there was a great discrepancy between what the astronomers observed and theoretical calculated values for a certain technical magnitude, the opacity. Opacity is a measure for how efficiently a gas or another medium can block radiation, that is to say a measure for the medium's impenetrability.

The core of the problem was that the Sun's internal chemical composition had up until then been calculated as comparable with the Earth's, that is to say as having a very high metal content.

Quantum physics out in space

With the new quantum theory Bengt Strömgren could calculate new models of the physical conditions of the stars.

In 1932, as a new Associate Professor at the University of Copenhagen, Bengt separated his research from the traditional astronomical areas with the incorporation of the theories of quantum mechanics and by making comprehensive numerical calculations with the calculating machines of that era.

In 1932 Strömgren revived the hypothesis that the abundance of hydrogen was actually much greater than had previously been assumed, which also solved the problem with the opacity.

Hydrogen in the universe

Against the backdrop of the extensive numerical calculations, based on the latest theories of physics of the absorption properties of atoms, showed Strömgren that the opacity discordance disappeared with a hydrogen content of ca. 1/3 of stellar mass - and the remaining 2/3 of heavier elements.

But when the matter of the universe is composed primarily of stars - some surrounded by planets - then the results must mean that the abundance of hydrogen in the universe was much greater then had previously been suspected.

Moreover, in 1937 Strömgren worked out that the helium content was higher than expected. With the result he estimated the relative abundance of hydrogen (X), helium (Y) and heavier elements (Z) to values very close to the values we know today, which are (X,Y,Z)=(71, 27, 2) (in percentages).

Danish astronomy on the world map

Bengt Strömgren's discovery also had significance for the astronomical community in Denmark. The large observatories around the world and especially in the US became aware of the theoretical research in Copenhagen, not only at the Niels Bohr Institute for Theoretical Physics, but also the observatory at Øster Voldgade. 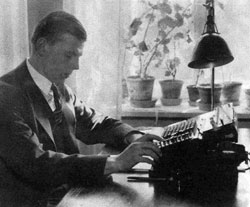 Astronomer Bengt Strömgren (1908-1987) has been singled out as perhaps the last Danish scientist with the importance not only for his science but also to society on an equal footing with HC Ørsted, August Krogh and Niels Bohr.

Strömgren was an extrovert researcher with deep and broad interest and knowledge, not only for its own area of expertise, but also for major research perspectives. There was a capacity which, with its international collaborations made it interesting and rewarding for the large international cooperation with Denmark.