The University of Copenhagen Observatory on Østervold was erected in the years 1859-1861 on one of the bastions of the old city to accommodate the need for new buildings. The University Observatory remained here until 1996. 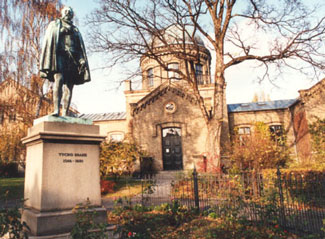 The Observatory on Østervold with the statue of Tycho Brahe.

In front of the building there is a fine statue of Tycho Brahe by H. W. Bissen (1866). The Observatory had several astronomical instruments of which today only the 25-centimeter refracting telescope remains. The Observatory was the home of the news service bureau of the International Astronomical Union from 1922 to 1965, which was ably managed by the Observer Julie Marie Vinter Hansen from 1922 to 1960.