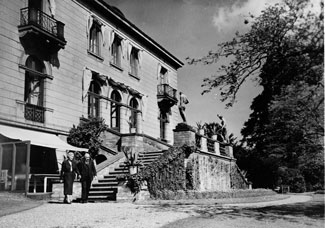 Margrethe and Niels Bohr in the garden of the Honorary Residence. Courtesy of the Niels Bohr Archive.

The Carlsberg Brewery was established by Jacob Christian Jacobsen (1811-1887) in Valby, just outside Copenhagen. It was named after his son Carl (1842-1914).

Jacobsen the elder set up his residence there in 1854. When he died in 1887, his will stipulated that after the villa had been occupied for life by Carl, it should be used as an Honorary Residence by ‘‘a man or a woman deserving of esteem from the community by reason of services to science, literature, or art, or for other reasons.''

The residents were to be chosen by the Royal Danish Academy of Sciences and Letters, whereas the upkeep should be the responsibility of the Carlsberg Foundation, a major benefactor of Danish science, which was established by Jacobsen in 1876. 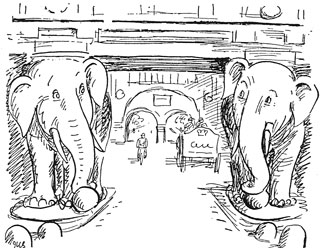 The Elephant Gate beside Carlsberg Museum. Courtesy of Berlingske Tidende.

The most prominent occupant of the Honorary Residence was Niels Bohr, who lived there from 1932 until his death in 1962. After the last resident died in 1995, the Honorary Residence was transformed into the Carlsberg Academy, the ground floor of which the Royal Academy now utilizes as a conference center, while the top floor constitutes an apartment for a prominent visiting foreign scientist for a limited period. Jacobsen's villa is a next-door neighbor to the Carlsberg Laboratory, which was established by Jacobsen in 1875 as an institution for chemical research in connection with the brewery.

The Carlsberg Visitor's Center at Gamle Carlsbergvej 11, DK-2500 Valby is currently open to visitors from 10:00 a.m. to 4:00 p.m. Tuesday to Sunday. It is a combined museum and exhibition center, providing the visitor with information regarding the history and current activities of the brewery. A glimpse of the Honorary Residence is provided during the tour.

The Carlsberg Museum, Valby Langgade, deals with Jacobsen family history and also the Carlsberg Laboratory. Opening hours are from 10:00 a.m. to 3:00 p.m. Monday to Friday.