In 1997, Mars Pathfinder landed on Mars with the Danish developed instruments to study the rust-red Martian dust and now, along with the rest of the team, Jens Martin Knudsen could begin analysing the images sent to Earth. 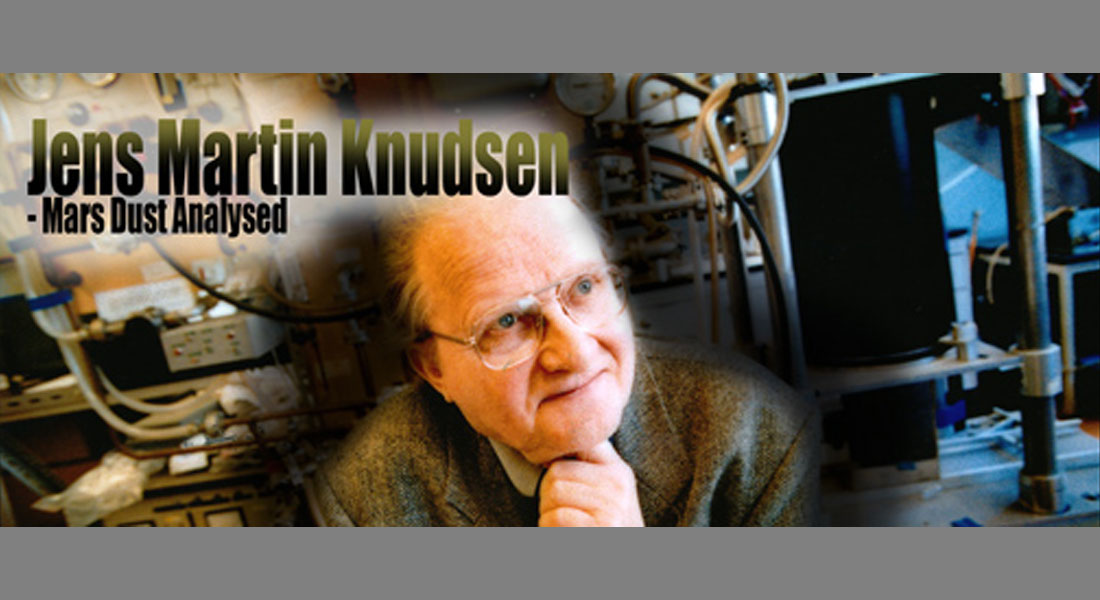 It turned out that the colour of the dust on the strongest magnets was about the same as the airborne dust you see when you look at the sky.

This fact alone suggests that the particles captured on the magnets were mixed in such a way that that every single dust particle was comprised of a variety of minerals, of which only a few are significantly magnetic.

The dust that was attracted to the weaker magnets was progressively less dense and apparently also less red the weaker the magnets. This fits well with the fact that for a dust particle to be attracted to a weak magnet it requires that the particle contains strongly magnetisable material – and the most common, naturally occurring magnetic material is the mineral magnetite (which is black or dark grey).

Unfortunately, the two Mars Surveyor missions failed in 1998: Mars Climate Orbiter and Mars Polar Lander. These losses led to the cancellation of the 2001 lander and a change in the NASA's Mars Exploration Program: a pair consisting of an orbiter (an orbiting satellite) and a landing mission at every launch opportunity, which occurs approximately every two years (there are approximately 26 months between the times when Mars and Earth are positioned advantageously in relation to each other).

On the other hand, NASA chose to exploit the particularly favourable launch opportunity in 2003 to send up two robots, or 'Mars Exploration Rovers', namely Spirit and Opportunity.

These rovers would bring a small grinding machine (a so-called 'rock abrasion tool') that could grind a clean surface on a selected stone so that you could use a microscope camera, an elemental analyser and a Mössbauer spectrometer to study the cleaned stone free of the products of weather degradation.

This grinding machine contained small built-in magnets produced and delivered by the Mars Group at the Niels Bohr Institute.

The purpose of these small magnets was to attract the dust produced during the grinding. If the dust contained magnetic minerals, the magnets would attract these and the dust on the surface of the magnets could be examined using the mission's main scientific cameras (Pancam) on top of the camera mast.

The first Mössbauer spectrum from space

Landing a folded up rover on Mars is a complicated affair and it took almost seven days on Mars before the first rover, Spirit, was fully unpacked and ready to drive off the lander.

When it succeeded in reaching the surface, the first thing they chose to do was to take a close-up of the Martian soil using the robotic arm's microscope camera.

To call it a microscope is really a bit of an exaggeration, as the resolution of the instrument corresponds to what a person can see through a powerful microscope. Nevertheless, some very fine pictures of the porous Martian were taken at the highest resolution ever.

After this, the highest priority was to examine the Mössbauer spectra of the Mars soil and this was done over a night.

And when this, the first Mössbauer spectrum ever recorded on another, was sent back to Earth, Jens Martin Knudsen was among the very first who got to see it.

Several magnet experiments on board

Another of the Danish magnet experiments on board, the 'sweep-magnet', showed that surprisingly little of the airborne dust was non-magnetic. This could be seen because very little dust was able to reach the central area of the small, very powerful ring magnet that was built into the sweep-magnet experiment.

The experiment also showed that it would be possible to protect a small area from the deposition of magnetic dust from the atmosphere using a very powerful ring magnet – and this result led to Denmark being invited to deliver instruments for NASA's next lander mission, the Phoenix mission.

The most important magnet experiments on Spirit and Opportunity, however, were the so-called 'capture magnet' and 'filter magnet', both of which sat just below the camera mast.

The magnets were inclined 45 degrees to the horizontal, so that they could both be seen with the colour cameras, the Pancam, and then the dust could be examined using all of the instruments located on the end of the robotic arm, the microscope camera, the elemental analyser and the Mössbauer spectrometer

The images taken by the Pancam during the mission showed that these particular magnet experiments were very dynamic, as the colour and density of the dust layer on the magnets varied dramatically due to wind gusts, which were capable of removing the least magnetic dust particles and thus increasing the concentration of more magnetic particles in the thin layer of dust.

The microscope images showed that the strongly magnetic particles from the 'capture magnet'  could spontaneously form chains between the underlying ring magnets. This was behaviour that the group had only seen with relatively pure magnetite particles in simulation experiments.

Studies of the elemental composition of the dust on the magnets also reflected the dynamic the group had observed with the Pancam:

Throughout the mission, an increasing or constant level of the elements iron, titanium and chromium (all elements found in naturally occurring magnetic materials) were seen, whereas elements like sulphur and calcium varied much more according to the wind, because these elements were associated with weak or non-magnetic minerals, which could be blown away by a strong wind.

Mössbauer spectroscopy of thin layers of dust like those on the magnets is difficult and time consuming to perform on Mars, but they actually managed to get surprisingly good and extremely valuable Mössbauer spectra of the dust on the 'capture magnet' at times when the concentration of magnetic minerals in the dust was relatively high.

Just one of these spectra is worth the entire investment in Danish participation in the missions ...

Perhaps the most important result

The results showed that the airborne dust on Mars is magnetic because it contains the mineral magnetite, but the minerals olivine and pyroxene are also present in the dust captured on the magnets.

The fact that the magnetic mineral was magnetite and maghemite was a completely new and surprising result. Maghemite is the highly oxidised form of the same mineral.

The fact that the entire surface of Mars was so rust red or yellowish led everyone to believe that the rust was more widespread than it turned out to be. This was also something that led to group to believe that the magnetic material must be maghemite and not magnetite.

Combined with the elemental analyses of the same dust, the studies showed that the magnetic minerals were formed as the rocks on the Martian surface fell apart, broken down mechanically or by frost, but the minerals showed only a very slight influence of water during their formation.

Along with the German built Mössbauer spectrometer and the elemental analyser, the magnets showed that the airborne dust on Mars was not dominated by minerals formed in water, but rather as the result of dry erosion.

It was a great joy for Jens Martin Knudsen to experience the successful landing of the two rovers, Spirit and Opportunity – even though he could not be in the control centre himself due to advanced cancer.

But it was perhaps just as great a pleasure for him to see the first Mössbauer spectrum of the dust on Mars.

This had been one of his great goals and in a way it was a kind of culmination of Jens Martin Knudsen's involvement in the exploration of Mars.

The route to Mars