The World Wide Web was originally created at CERN, the European Organization for Nuclear Research in Genève in Switzerland, in order to make it easier for physicists to navigate the vast amounts of data. Today it is the foundation for the entire global internet, which everyone can use.

The internet has existed since the 1960s. But it not until the mid-1990s that the internet became what we know it as: A place where you can quickly click to answers to small and large questions, buy music, books and clothes, see friends' newest pictures, and write updates about yourself. It was the World Wide Web that made ordinary people into net-surfers. 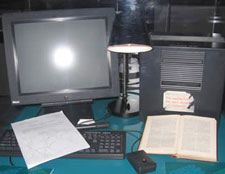 This NeXT-computer was the world’s first web server. It is still at CERN.

The internet was originally invented because the American military wanted to spread their important data between different computers. Then it would be harder to destroy them all.

In the beginning, the internet consisted simply of some computers connected with wires and sharing their storage capacity.

From one computer the employees could find files on another computer if they knew the codes which elicited them. That is to say, they internet acted as a kind of extended archive, where one had to know the exact names of all of the documents you wanted to get a hold of.

For the first thirty years the internet was therefore only used at universities and other places where it was necessary to store lots of information. There was hardly anyone who had access in their own homes. 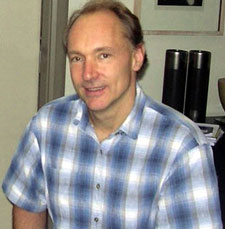 For at World Wide Web to function people have to use the same codes when they, for example, make websites. Otherwise, we cannot read what other people put out on the net. Together with a team of computer scientists Tim Berners-Lee started W3C; ”World Wide Web Consortium” in 1994. W3C determines which codes and formats should be used on the World Wide Web.

System for the physicists' data

In 1989 the Englishman Tim Berners-Lee was working at CERN - Europe's nuclear research centre. He wanted to make it easier for CERN's physicist to navigate the enormous amounts of data, which CERN produces; even if they were sitting elsewhere in the world.

Therefore he suggested combining the internet with a hypertext system. A hypertext is a collection of documents which are connected to each other with links up and down. Users of hypertext can even add texts and links, thus improving as they use it. Berners-Lee thought that it would be easier to find information on the internet if it was organised in that way.

After having suggested his idea, Berners-Lee began to develop the parts to such a system. And the year after he presented what he called "World Wide Web". Berners-Lee had created both the language and the codes that would be used to write text in the system. In addition he made the first server, the first browser and the first websites.

WWW is a hit

There were other hypertext systems for the internet at the time, but the WWW was better in several areas. Furthermore, a browser was invented for the WWW shortly after which made it possible to view images with the text. This made the system much more popular. In 1993, CERN decided to make the World Wide Web free. And when it eventually became easier to connect desktop computers to the network, the World Wide Web and the internet really took off.

Hypertext is not a new idea