The return home to Denmark from Greenland is difficult, because it is nearly impossible to find a place to live in post-war Copenhagen. But they finally find a temporary apartment, which is exchanged for a small house in the spring of 1951. ”Inge’s wishes leaned toward a secluded villa in the middle of [City Hall Square] with a view over [the water] and close to the forest and beach, but we quickly turned towards the more humble parts of Copenhagen,” says Willi Dansgaard. In the end, they find a house in Herlev.

He dreams of a position at the Biophysical Laboratory, which he keeps in regular contact with, but it takes a while for this wish to be fulfilled. The director of the Meteorological Institute has plans to put Dansgaard in charge of cleaning up the institute’s extensive and very messy library – a job the ambitious Dansgaard does not find interesting: ”I had not trained as an experimental physicist with the aim of conducting scientific research just to end up as a rubbish man in dusty archives,” he writes.

After a while and with the help of some applied diplomacy, Dansgaard manages to get out of the task and he is instead transferred to meteorology, where he is responsible for reading the weather forecast on the radio. The inventive Dansgaard cannot help but make suggestions for improvements and this is poorly received among colleagues who “found it arrogant to engage in anything other than the obligatory work” he says.

Willi Dansgaard as a young biophysicist. The writing desk once belonged to Niels Bohr.

The chance to return to the Biophysical Laboratory first appears in 1949, when the laboratory acquires Denmark’s first electron microscope and invites Dansgaard, along with his old classmate, Fritz Carlsen, to participate in the assembly. The project ends with the dexterous Fritz getting hired while Dansgaard, to his disappointment, is passed over.

However, just a year later the opportunity arises again, when the laboratory gets a share of the Marshall Aid, which Denmark receives from the United States after World War 2, and uses the money to purchase a new instrument – a so-called mass spectrometer – which Dansgaard will help set up. A mass spectrometer is an advanced measuring instrument that can separate particles of different mass and can differentiate isotopes of an element. It is primarily used in chemistry to analyse the composition of substances. 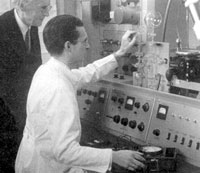 Willi Dansgaard demonstrates the mass spectrometer, that he was given responsability over at the Biophysical Laboratory

Willi Dansgaard sees it as his big break and spends evenings and weekends at work and his diligence pays off as well as he is hired as a “fee paid research assistant”. To the bewilderment of his colleagues, he chooses to trade his permanent government position at the Meteorological Institute for a casual position for a lower wage at the Biophysical Laboratory.

Willi Dansgaard is primarily employed to take care of the mass spectrometer and to introduce it to the fields of biology and medicine, but the instrument generates little interest among the other researchers, who on the other hand are queuing up to use Fritz Carlsen’s electron microscope. ”Depression was about to set in,” he writes, when he gets a good idea one Saturday at the end of June 1952.

He is at home when he asks himself whether rainwater from thunderstorms always has the same isotopic composition or whether there might be differences depending on the temperature of the precipitation and since he had access to a machine that could measure this kind of thing, then “there was no harm in trying even if it couldn’t be called biophysics.”

The equipment would later improve, but 40 years of work started with a beer bottle in the garden in 1952.

Willi Dansgaard simply places a beer bottle with a funnel out in the garden while it is raining and in this way collects water from a frontal system which fortunately turns out to be exceptionally well developed. He empties it into a new closed container every 1-2 hours and notes the time: “Everything the house had to offer for suitable containers was quickly exhausted and they eventually had to use various jars and cans,” he explains.

The results are remarkable – it turns out that amount of the heavy oxygen isotope 18O in the rainwater is determined by the temperature of the cloud at the point at which the precipitation was condensed and this “marked the beginning of 40 years of exciting work,” he explains excitedly.

He publishes his findings in an article, but he is troubled by the fact that he doesn’t have anyone to discuss his research with in the laboratory or at the Meteorological Institute, which he is otherwise trying to open a dialog with. On the other hand, no one is complaining that it isn’t exactly biophysics that he is occupying himself with.

He continues his investigations – including high up in the air, when he borrows a plane from Værløse Air Base so he can collect rainwater from under the clouds, the middle of them and over them. Inge does not want to become a widow at such a young age so she flies with him: “We were up to collect rainwater in the clouds a few times – it appears that Willi has gotten mould on the curtain rod, because you can just as well wait for the rain to fall down,” she philosophises in her diary.

The wife Inge in front of the aircraft that would take her and Willi Dansgaard up into the clouds to collect rainwater.

Does the water say something about the climate?

But if the water says something about the temperature, then the next step would be to examine whether the isotopic composition of the water could say something about seasonal variations and perhaps about the climate over time and in connection to this Dansgaard reaches an agreement with the East Asiatic Company (EAC), which helps him to collect river water form around the world. The results show clear variations, but what are most interesting are the ideas that they set in motion.

For if the precipitation is a measure for the temperature, then you must be able to measure past climate from old water. And where do you find old water? You find it in glacial ice on Greenland. ”Thus my interest in Greenland returned, now in a completely different context. I was sure that it was a good idea, maybe the only really good one I’ve had – on the other hand, I could live off of for the rest of my life,” he writes in his autobiography.

He describes the idea in the journal Geophysica et Geochimica Acta in an article he finishes early one morning in the spring of 1954. He takes the bike to the post office in Købmagergade, and ”the feeling that something important had been achieved turned the bike ride into an indescribable experience, […] I had never been so happy in my private life and in my job as I was on that May morning,” he explains.