Charles Marcus, who is a professor and head of the Center for Quantum Devices at the Niels Bohr Institute at the University of Copenhagen, has been awarded the prize for ’Research Excellence in Nanotechnology’ by the nanoscience centre, NBIC at the University of Pennsylvania, USA. It is an international prize and is given in recognition of outstanding research in nanotechnology. 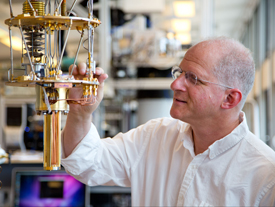 Charles Marcus, who is a professor and head of the Center for Quantum Devices at NBI has been awarded the prize for ’Research Excellence in Nanotechnology’ by the nanoscience centre, NBIC at the University of Pennsylvania, USA.

Charles Marcus is receiving the prize for his outstanding research, which is very broad and ranges from quantum information and electron spin coherence to nuclear polarisation in solids and biomedical applications of nanoparticles. The idea of this interdisciplinary research is for example to use advanced materials to develop nanoelectronics comprised of semiconducting nanowires, carbon nanotubes and superconducting systems and develop new methods of measurement.

“I have moved around – not only geographically,” says Charles Marcus with a twinkle in his eye, referring not only to the great range of his research, but also the great geographical leaps he has taken in his career.

Charles Marcus was born in Pittsburgh, Pennsylvania, grew up in Sonoma, California and studied at Stanford University (1980-84). He received his PhD from Harvard University, where he continued as a postdoc. From 1992-2000, he worked at Stanford and from 2000-2012 he was employed at Harvard, where he was the head of the Harvard Center for Nanoscale Systems from 2004-09.

In January 2012, the Niels Bohr Institute brought the world’s leading researcher in quantum electronics to Copenhagen in Denmark from Harvard in the United States, where he was the head of a large research centre with many researchers. At the Niels Bohr Institute, he received both a special Villum Kann Rasmussen professorship and a Center of Excellence and the two large grants have been used to build a huge new research centre, the Center for Quantum Devices, with top laboratories and more that 80 full-time researchers, PhD students and technicians. The highly international research environment was one of the things that attracted Charles Marcus, who moved with his family to the other side of the Earth.

The newest project is a research collaboration with Microsoft on the computers of the future, which are expected to be based on topological particles, called Majoranas, which exist in certain materials. The idea is that these can be woven around each other by using electrical control, resulting in interactions that generate information – quantum information.

Charles Marcus has authored more than 170 scientific articles with more than 18,000 citations. He is a member of the American Physical Society and of the world’s largest scientific society, AAAS (American Association for the Advancement of Science), and he has received the Newcomb-Cleveland Prize from AAAS. The Prize for Research Excellence in Nanotechnology will be presented at a ceremony on 22 October.

Charles Marcus, professor and leder af the Center for Quantum Devices at the Niels Bohr Institute, University of Copenhagen, +45 2034-1181, Marcus@nbi.dk