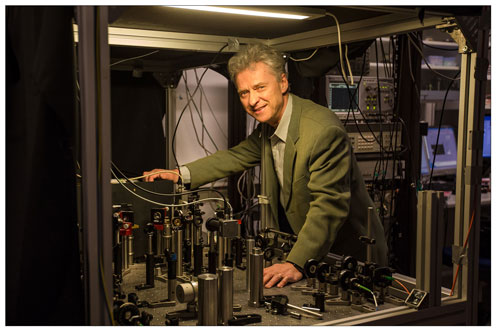 Professor Eugene Polzik in the QUANTOP Laboratory at the Niels Bohr Institute in Copenhagen.

The unifying topic of research and development at QUANTOP that is being funded by these sources is quantum measurement on large objects beyond standard quantum limits with applications ranging from force and acceleration sensors to gravitational wave detectors.

The John Templeton Foundation (JTF) supports research addressing Big Questions, such as “what are the limits to what we can see?” (www.templeton.com). The proposal “Quantum limits of the measurement of motion”, submitted by Eugene Polzik has been selected for funding in an extremely selective competition where only a few per cent of submitted proposals have been funded. The big question that the project addresses is “can we observe the motion of a macroscopic object without uncertainty?”

The result of this project will change our understanding of the fundamental quantum limits on the knowledge we can obtain about the motion of objects. Those fundamental limits have been discussed by the founding fathers of Quantum Mechanics, such as Niels Bohr and Werner Heisenberg. Bohr’s complementarity principle and Heisenberg’s uncertainty principle set limits on how precise the position and velocity of an object can be observed. Those limits have long been thought to prohibit precise observation of the motion, as observation of the position of an object leads to random disturbance of its velocity. Thus, the observation process itself leads to disturbance of the object’s motion and results in the so-called “standard quantum limit” of the precision for detection of motion. Eugene Polzik and co-workers have proposed a way to measure the motion of an object beyond the standard quantum limit. This novel approach forms the basis for the funded project. This approach involves the generation of non-classical entangled states of massive objects. In this way, the project will explore the boundaries between the classical and the quantum world for truly macroscopic objects at a kilogram scale.

In addition to the research activities, JTF will support a conference on “Physics and Philosophy of Quantum Measurement” to be held in Copenhagen in 2019.

Besides the fundamental importance of studying ultimate quantum limits of knowledge, this project will generate insights that will help in developing novel types of measurements of forces, acceleration and gravity. Thanks to the development of physics and laser technology, the standard quantum limit of precision has been achieved in laboratory devices around the world. Very important examples of such devices are gravitational wave detectors, such as LIGO in the US and VIRGO in Europe. Gravitational waves observation, the subject of this year Nobel Prize in Physics, is performed by detecting tiny motion of mirrors of optical interferometers caused by gravitational waves. Research supported by the JTF also aims to explore the application of the novel principle of measurement of motion to gravitational wave detectors.

The members of the research group Quantop and Eugene Polzik.

The grant from the EUREKA framework supports the technological developments of the setup aimed at improving the sensitivity of gravitational wave detectors. The project “Quantum measurement enhanced gravitational wave detection (Q-GWD)” unites research teams from Denmark and Austria. The Danish participants, the Danish Institute for Fundamental Metrology and QUANTOP Laboratory are funded by Innovation Fund Denmark. The goal of the project is the development of a portable setup involving an entangled light source and atomic spin system that is capable of suppressing the quantum noise of gravitational wave interferometers.