Jan W. Thomsen comes from the post as Head of the Quantum Metrology Research Group at the Niels Bohr Institute, and he takes over as Head of Department on September 1, 2017. 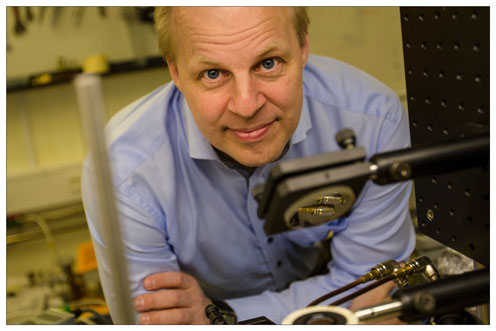 Jan W. Thomsen will begin his new job September 1st. He succeeds Niels Obers who was temporarily appointed to the position in January of 2017 when the former head of NBI, Robert Feidenhans'l, left to serve as managing director of the large research facility European XFEL in Hamburg, Germany.

Heading the Niels Bohr institute (NBI) means taking on "a position of trust" and at the same time the job is also "an honorable and very exiting challenge", says Jan W. Thomsen. Adding that he is focused on the importance of maintaining and supporting "the state of the art research and teaching which is the hallmark of the Institute".

Jan W. Thomsen has a long affiliation with NBI where he received his initial education in physics. He also holds a ph.d. from Université Paris-Sud, France, where he specialized in nuclear physics and laser technology - which over time led to his research in quantum metrology and atomic clocks.

In 1995, following a post doc-position at NBI, he signed up with University of Utrecht, The Netherlands. He was 'brougt back' to NBI three years later thanks to a Carlsberg-grant - and ever since, save a one year stint (2007-08) with JILA at University of Colorado, USA, Jan W. Thomsen has been 'going steady' with NBI.

His field of research, atomic clocks, centers on quantum mechanical pendulums - atoms 'manipulated' by laser beams. These clocks are extremely reliable - they lose just 1 second in 13 billion years! - and are used in a number of experiments related to technology and fundamental physics. Jan W. Thomsens research group is constantly looking into new and creative ways to improve atomic clocks  - e.g. by applying quantum mechanical effects of cold atoms.

From now on, however, Jan W. Thomsens focus will be on heading the entire NBI - "with due respect to the high standards set by Robert Feidenhans'l as well as Niels Obers" - and knowing the NBI from inside through many years of research and teaching will definitely be helpful, Mr. Thomsen adds.

The Institute is preparing for a shift of location - a new Niels Bohr Building is under construction - and the new surroundings will, as Jan W. Thomsen puts it, "benefit an even closer knit co-operation" between the various fields of research within the academic institution.

At the same time the construction of the building poses considerable challenges, the new head of NBI acknowledges: "It takes a lot of overseeing and planning at all levels, not least the financial side of it".

Jan W. Thomsen has been a highly appreciated and very popular lecturer at NBI. In 2015 he received the 'Jens Martin Prize' - the highest recognition for excellent teaching awarded by NBI - and in 2016 the faculty appointed him 'Lecturer of the Year'.