Mogens Høgh Jensen appointed Knight of the Order of the Dannebrog

Following the recommendation from the Rector of the University of Copenhagen, Mogens Høgh Jensen was appointed Knight of the Order of the Dannebrog by HM Queen Margrethe on the 275th anniversary of the Royal Danish Academy of Sciences and Letters, which took place on 13 November 2017. 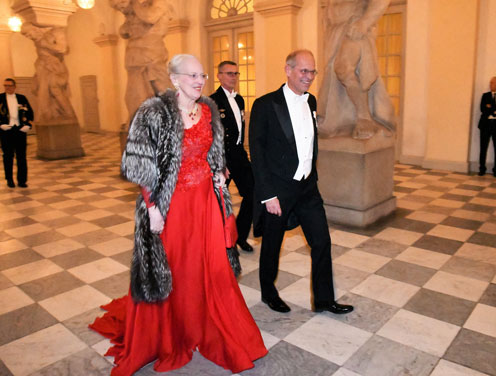 At the 27th anniversary of the Royal Danish Academy of Sciences and Letters, which took place on 13 November 2017, HM Queen Margrethe appointed Mogens Høgh Jensen Knight of the Order of the Dannebrog. Photo: Hasse Ferrold.

Mogens Høgh is a professor in Biocomplexity and has been a leading researcher in complex system dynamic for 35 years. Already during his PhD studies, he developed, in collaboration with Per Bak and Tomas Bohr, a universal theory for the transition to chaos in dissipative systems. This theory has been demonstrated in many systems from fluid dynamics to semiconductors. Recently, the theory has been taken up again to describe protein oscillations in single cells.

In 2000, he became a member of the Royal Danish Academy of Sciences and Letters, which he was the Secretary General of from 2011-2016. In 2016, he was elected president of the Academy. It was in his capacity as president that he led the celebration of the 275th anniversary of the Academy on 13 November 2017, attended by Queen Margrethe and Minister for Higher Education and Science.

In the mid-80s, he worked at the University of Chicago and was instrumental in developing the so-called multifractal theory. This theory has been applied in many disciplines, from social sciences, to economics, chemistry, biology and medicine. Mogens Høgh Jensen’s contribution is one of the most cited papers in the field with approx. 5000 citations.

Since 1990, he has built up the complexity group at the Niels Bohr Institute, which now has 7 permanent employees. During that time, he has worked in a variety of fields from chaos and fractal theories, to turbulence in liquids and other complex phenomena – for example, the physics of finance. He was also the director of the 'Center for Chaos and Turbulence Studies - CATS' for several years.

Around 2005, he began to take an interest in complex phenomena in the biological world. Development of this activity was made possible by a major grant from the V. Kann Rasmussen Foundation to establish the 'Danish Center for Biophysics - BioNET', which he was the director of until 2015. In recent years, he has been particularly interested in protein oscillations in single cells and has thus returned to his original theories for chaotic systems. This work has resulted in two recent articles in the highly esteemed journal Cell Systems.

Mogens Høgh Jensen has been a sought-after speaker for many years and has given more than 240 invited lectures at international conferences. At the Niels Bohr Institute he has trained approximately 85 Masters and PhD students and has offered a number of courses on the physics of complex systems. He has received the Kirstine Meyer Prize and the Ole Rømer Prize and in 2011, he was awarded the Physics Prize of Norway, Gunnar Rander, which was presented by HM King Harald of Norway.