One of the world’s leading researchers on catalysis, Prof. Jens Kehlet Nørskov from the Technical University of Denmark (DTU), received the Niels Bohr International Gold Medal sunday October 7 on Bohr's birthday. The medal was founded by the Danish Society of Engineers, IDA, and it was presented by HM Queen Margarethe at a special event at the Carlsberg Academy in Copenhagen. 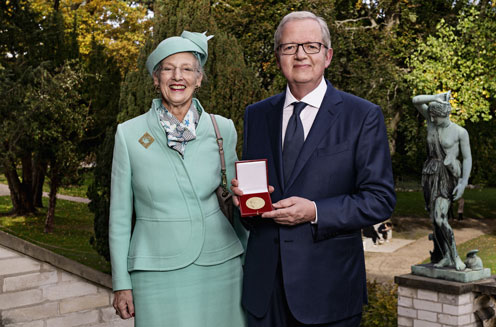 One of the world's leading researchers in catalysis, Prof. Jens Kehlet Nørskov and HM Queen Margrethe with the medal outside the Carlsberg Academy in Copenhagen. Copyright Ingeniørforeningen IDA

This is the first time a Dane has received the gold medal since Niels Bohr himself received it in 1955. The award means that Jens Nørskov joins a prominent group of recipients, as the medal has been awarded to no less than nine Nobel laureates over the years. Jens Kehlet Nørskov is the twelfth in the series of prominent physicists and engineers to receive the medal, which was established in 1955 as a tribute to the Danish physicist, Niels Bohr.

This year’s award was a collaboration between the Danish Society of Engineers, IDA, the Niels Bohr Institute, the Royal Danish Academy of Sciences and Letters, and the Carlsberg Foundation, which has donated the EUR 100,000 that comes with the medal. 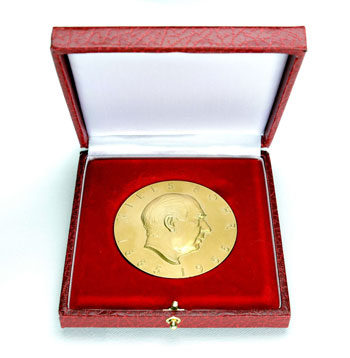 The Niels Bohr International Gold Medal was established in 1955, on the occasion of Niels Bohr's 70th birthday. Niels Bohr himself received the first medal, which since has been awarded ten times until 1982. On the occasion of the 100th anniversary of Bohr's atomic model in 2013, the medal was awarded to the French physicist Alain Aspect, and now for the second time to another Dane, Prof. Jens Kehlet Nørskov. Copyright Ingeniørforeningen IDA

Jens Kehlet Nørskov has a comprehensive scientific production behind him, and is one of the world's most cited researchers within his field. Following a long professorship at Stanford University in California, in 2018 he returned to Denmark in order to build a new centre for catalyst theory at the Technical University of Denmark (DTU).

The focal point for Jens Nørskov’s research is understanding physical and chemical processes on the surfaces of materials. His concepts and models constitute an important basis for understanding heterogeneous catalysis and they are widely applied within science and industry.

“Jens Nørskov’s work has enormous social significance. The development of new catalysts to convert energy from the sun into green fuels and chemicals is of the utmost importance in avoiding the extensive use of fossil fuels, which is so destructive for the environment and climate. Jens Nørskov is at the scientific forefront of such efforts,” to quote the recommendation for the winner.The societal dedication and impact is very much in line with the work for peace done by Niels Bohr himself in the later years of his career. He used his influence as a researcher through political channels like the UN, to propagate ideas of the peaceful use of nuclear power and dialogue over confrontation in a political climate that was very dominated by the cold war.

Read more about the medal, background, etc. on the website set up in connection with the award: bohrmedal.com