The Niels Bohr Institute Medal of Honour was established in 2010 to mark the 125th anniversary of Niels Bohr’s birth. The medal is awarded annually to a particularly outstanding researcher who is working in the spirit of Niels Bohr: International cooperation and exchange of knowledge. 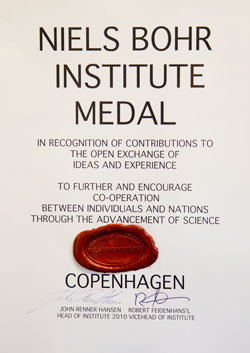 In 1922, Niels Bohr received the Nobel Prize for his pioneering atomic model, which forms the basis for our understanding of how the world is structured. He is regarded as the founder of modern quantum physics which has revolutionised technological development. For example, all electronics found in modern devices and lasers are based on Bohr’s revolutionary breakthroughs.

The Niels Bohr Institute Medal of Honour honours individuals who make exceptional contributions to scientific research in the physical disciplines, which in addition to fundamental physics spans astronomy, geophysics, biophysics and nanophysics. The Medal of Honour is awarded to individuals who have been associated with the Niels Bohr Institute in their careers or who have worked closely with research groups at the institute.

Niels Bohr was one of the most important scientists of the twentieth century. In 1913, he published his three famous articles on the atomic model. In contrast to classical physics, he postulated that electrons could only move in certain orbits and that they released or absorbed radiation when they moved from one orbit to another. His theories created a revolution in physics.

The medal was made by the sculptor Rikke Raben for the Niels Bohr Institute in 2010. The medal is made of silver at the Royal Danish Mint/National Bank. Associated with the medal are two quotations, which tie into Niels Bohr’s ethical view of research and his ideal about an Open World with free sharing of knowledge and international cooperation:

1: What is it that we human beings ultimately depend on? We depend on our words. We are suspended in language. Our task is to communicate experience and ideas to others. (Aage Petersen, The Philosophy of Niels Bohr, in Bulletin of the Atomic Scientists, 1963, XIX, 7, p.10)

2: When searching for harmony in life one must never forget that in the drama of existence we are ourselves both actors and spectators. (Niels Bohr, ' Discussion with Einstein on Epistemological problems in atomic physics* in P.A. Schlipp (ed) Albert Einsten; Philosopher- Scientist.1949 p.236)

Receivers of the Medal of Honour