Preparing at NBI for the Physics Olympiad 2019

On Friday and Saturday, high school students underwent a challenging theoretical and experimental test at the Niels Bohr Institute in Copenhagen to qualify for next year’s Physics Olympiad. The objective is to find five of the country’s best young minds to represent us in Tel Aviv, Israel in June 2019.

The young people gathered in Auditorium M at the Niels Bohr Institute and ready for the challenging theoretical test.

The Physics Olympiad has existed since 1996 and Denmark has participated since 1995. Every year, more than 80 countries participate in the international finals and Denmark has done well – including this year, in August 2018 they won two silver medals and a bronze medal in Lisbon, Portugal. Denmark was clearly the best Nordic country and was competitive with large countries like Germany and Great Britain.

Before they get that far, they must first qualify and this takes place around the country in gymnasiums and HTX schools, where they take a theoretical test that roughly corresponds to an A-level exam in physics – but in less time.

The 15 best from the final continue on to further training. Then there is the final selection of the 5 winners who will comprise the Danish team at the international competition. 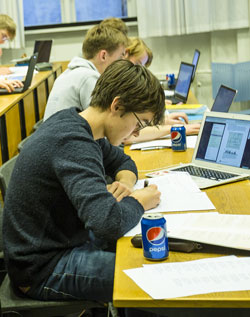 A three-hour theoretical test on Friday and another two-hour experimental test on Saturday.

The five best will train with the German national team

After qualifying in the preliminary round held around the country, 39 hopeful high school students met Friday afternoon for the Danish final of this year’s Physics Olympiad. It took place at the Niels Bohr Institute on Blegdamsvej in Copenhagen, where they had to complete a challenging 3-hour theoretical test equivalent to an A-level exam in physics. And on Saturday morning, it continued with a 2-hour experiment based test.

Of these 39 participants in the final, we have now selected a team of the 18 best for further training. After a final tough test in early May 2019, the final five will be taken to train with the German national team and will represent Denmark at the international Physics Olympiad in Tel Aviv, Israel.