Past temperature in Greenland adjusted

One of the common perceptions about the climate is that the amount of carbon dioxide in the atmosphere, solar radiation and temperature follow each other – the more solar radiation and the more carbon dioxide, the hotter the temperature. This correlation is also seen in the Greenland ice cores that are drilled through the approximately three kilometer thick ice sheet. But during a period of several thousand years up until the last ice age ended approximately 12,000 years ago, this pattern did not fit and this was a mystery to researchers. Now researchers from the Niels Bohr Institute among others have solved this mystery using new analytical techniques. The results are published in the prestigious scientific journal Science.

The Greenland ice sheet is an archive of knowledge about the Earth’s climate more than 125,000 years back in time. The ice was formed by the precipitation that fell as snow from the clouds and remained year after year, gradually being compressed into ice.

By drilling down through the approximately three kilometer thick ice sheet, the researchers retrieve ice cores, which provide detailed knowledge of the climate of the past annual layer after annual layer. By measuring the content of the special oxygen isotope O18 in the ice cores, you can get information about the temperature in the past climate, year by year. 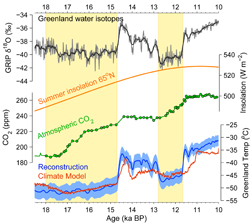 The researchers investigated ice cores from three different Greenland ice cores: the NEEM project, the NGRIP project and the GISP 2 project. But amount of the oxygen isotope O18 was not enough to reconstruct period temperatures in detail or their geographic distribution.

To get more detailed temperature data, the researchers used two relatively new methods of investigation, both of which examine the layer of compressed granular snow that is formed between the top layer of soft and fluffy snow and the layer deeper down in the ice sheet, where the compressed snow has been turned into ice. This process of transforming the fluffy snow into hard ice is physical and both the thickness and the movement of the water molecules are dependent on the temperature. “With the first method, we measured the nitrogen content and by measuring the relationship between the two isotopes of nitrogen, N15 and N14, we could reconstruct the thickness of the compressed snow 19,000 years back in time,” explains Vasileios Gkinis.

The second method involved measuring the diffusion of air with water molecules with different isotope composition in the layers with the compressed snow. This process of smoothing the original water isotope variations from precipitation is dependent on the temperature, as the water molecules in vapour form are more mobile at warmer temperatures. 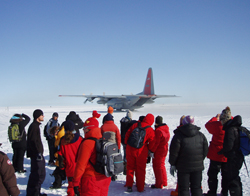 Crew exchange in the NEEM field camp on the Greenland ice sheet. Most cargo and personnel is flown to the camp on US LC-130 ski-equipped Hercules planes managed through the US Office of Polar Programs, National Science Foundation.

Data for the diffusion of the water molecules in the individual annual layers in the Greenland ice cores has thus made it possible to calculate the temperature in the layers with compressed snow 19,000 years back in time.

“What we discovered was that the previous temperature curve, which was only based on the measurements of the oxygen isotope O18, was inaccurate. The oxygen temperature curve said that the climate in central Greenland was colder around 12,000 years ago than around 15,000 years ago, despite the fact that two key climate drivers – carbon dioxide in the atmosphere and solar radiation – would suggest the opposite. With our new, more direct reconstruction, we have been able to show that the climate in central Greenland was actually warmer around 12,000 years ago compared to 15,000 years ago. So the temperatures actually follow the solar radiation and the amount of carbon dioxide in the atmosphere. We estimate that the temperature difference was 2-6 degrees,” says Bo Vinther, Associate Professor at the Centre for Ice and Climate at the Niels Bohr Institute, University of Copenhagen.