Quantum technology has the potential to revolutionize computation, cryptography, and simulation of quantum systems. However, quantum physics places a new demand on information processing hardware: quantum states are fragile, and so must be controlled without being measured. Researchers at the Niels Bohr Institute have now demonstrated a key property of Majorana zero modes that protects them from decoherence. The result lends positive support to the existence of Majorana modes, and goes further by showing that they are protected, as predicted theoretically. The results have been published in the prestigious scientific magazine, Nature. 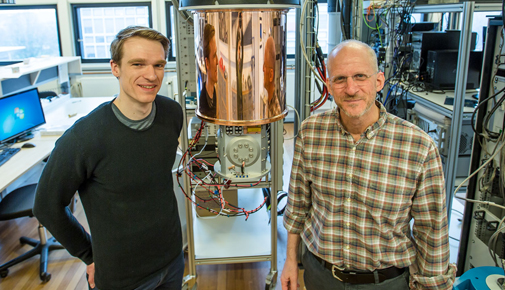 Normal computers are limited in their ability to solve certain classes of problems. The limitation lies in the fact that the operation of a conventional computers is based on classical states, or bits, the fundamental unit of information that is either 0 or 1.

In a quantum computer, data is stored in quantum bits, or qubits. According to the laws of quantum mechanics, a qubit can be in a superposition of states --- a 0 and 1 at the same time. By taking advantage of this and other properties of quantum physics, a quantum computer made of interconnected qubits should be able to tackle certain problems much more efficiently than would be possible on a classical computer.

There are many different physical systems that could in principle be used as quantum bits. The problem is that most quantum systems lose coherence very quickly—the qubit becomes a regular bit once measured. This is why researchers are still searching for the best implementation of quantum hardware. Enter the Majorana zero mode, a delocalized state in a superconductor that resists decoherence by sharing quantum information between separated locations. In a Majorana mode, the information is stored in such a way that a disturbance of either location leaves the quantum information intact.

“We are investigating a new kind of particle, called a Majorana zero mode, which can provide a basis for quantum information that is protected against measurement by a special and who knows, perhaps unique property of these particles. Majorana particles don’t exist as particles on their own, but they can be created using a combination of materials involving superconductors and semiconductors. What we find is that, first of all, the Majorana modes are present, verifying previous experiments, but more importantly that they are protected, just as theory predicts,” says Villum Kann Rasmussen Professor Charles Marcus, Director of the Center for Quantum Devices (QDev) and Station Q Copenhagen, at the Niels Bohr Institute, University of Copenhagen. 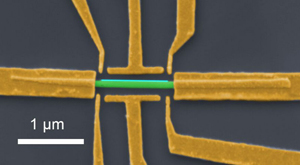 A nanowire device similar to those used in the study. The semiconducting nanowire (green), one-thousandth the width of a human hair, is coated with a superconductor (light blue) and electrically contacted with gold leads and electrostatic gates (yellow). (Credit: Shivendra Upadhyay / Sven Albrecht)

The Center for Quantum Devices is a leading research center in quantum information technology – with activities in theory, experiment, and materials research.

Semiconductor nanowires around 10 micrometers long and around 0.1 micrometers in diameter, coated with superconducting aluminum were used to form isolated islands of various lengths. By applying a strong magnetic field along the axis of the wire, and cooling the wires to below a tenth of a kelvin, a new kind of superconducting state, called a topological superconductor, was formed.

In 2012, physicists at Delft University in the Netherlands found the first signatures of Majorana zero modes in a similar system, with further evidence revealed in subsequent experiments around the world. Now, researchers at the Center for Quantum Devices have demonstrated critical predictions regarding their behavior, namely that their quantum states are protected in a fundamentally different manner from conventional quantum states. 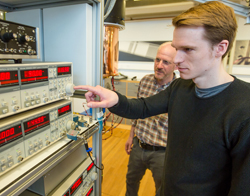 The experiments are carried out at ultra low temperatures close to absolute zero, which is minus 273 degrees C. Sven Albrecht and Charles Marcus follow the measurements. (Credit: Ola Jakup Joensen, NBI)

The experiments were carried out by PhD Candidate Sven Albrecht and postdoc Andrew Higginbotham, now at the University of Colorado/NIST, USA, using new superconductor-semiconductor hybrid nanowires developed by Assistant Professor Peter Krogstrup in collaboration with Marcus and Professor Jesper Nygard.

“The protection is related to the exotic property of the Majorana mode that it simultaneously exists on both ends of the nanowire, but not in the middle. To destroy its quantum state, you have to act on both ends at the same time, which is unlikely”, says Sven Albrecht.

Albrecht explains that it was a challenging effort to demonstrate the protection experimentally. The researchers had to repeat their experiment many times with nanowires of different lengths in order to show that the protection improved with wire length.

“Exponential protection is an important check as we continue our basic exploration, and ultimately application, of topological states of matter.  Two things have pushed the field forward—from the first Majorana sightings at Delft to the present results—the first is strong interaction between theory and experiment. The second is remarkable materials development in Copenhagen, an effort that predates our Center. Without these new materials, the field was rather stuck. That’s behind us now.” says Charles Marcus.

The research at the Center for Quantum Devices and Station Q Copenhagen was supported by Microsoft Research and the Danish National Research Foundation and the Villum Foundation.