The Sound of Quantum Vacuum

Quantum mechanics dictates sensitivity limits in the measurements of displacement, velocity and acceleration. A recent experiment at the Niels Bohr Institute probes these limits, analyzing how quantum fluctuations set a sensor membrane into motion in the process of a measurement. The membrane is an accurate model for future ultraprecise quantum sensors, whose complex nature may even hold the key to overcome fundamental quantum limits. The results are published in the prestigious scientific journal, Proceedings of the National Academy of Sciences of the USA.

Vibrating strings and membranes are at the heart of many musical instruments. Plucking a string excites it to vibrations, at a frequency determined by its length and tension. Apart from the fundamental frequency - corresponding to the musical note - the string also vibrates at higher frequencies. These overtones influence how we perceive the 'sound' of the instrument, and allow us to tell a guitar from a violin. Similarly, beating a drumhead excites vibrations at a number of frequencies simultaneously. 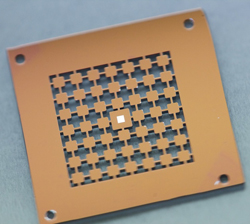 A membrane resonator (central white square) in its ‘phononic crystal’ shield of cross-shaped holes. Even though the membrane is nearly the size of a flea (0.5mm), its motion follows the laws of quantum mechanics, as Niels Bohr Institute researchers show. (Credit: Albert Schliesser, NBI)

These matters are not different when scaling down, from the half-meter bass drum in a classic orchestra to the half-millimeter-sized membrane studied recently at the Niels Bohr Institute. And yet, some things are not the same at all: using sophisticated optical measurement techniques, a team lead by Professor Albert Schliesser could show that the membrane’s vibrations, including all its overtones, follow the strange laws of quantum mechanics. In their experiment, these quantum laws implied that the mere attempt to precisely measure the membrane vibrations sets it into motion. As if looking at a drum already made it hum!

A 'drum' with many tones

Although the membrane investigated by the Niels Bohr Institute team can be seen with bare eyes, the researchers used a laser to accurately track the membrane motion. And this indeed reveals a number of vibration resonances, all of which are simultaneously measured. Their frequencies are in the Megahertz range, about a thousand times higher than the sound waves we hear, essentially because the membrane is much smaller than a musical instrument. But the analogies carry on: just like a violin sounds different depending on where the string is struck (sul tasto vs sul ponticello), the researchers could tell from the spectrum of overtones at which location their membrane was excited by the laser beam.

Yet, observing the subtle quantum effects that the researchers were most interested in, required a few more tricks. Albert Schliesser explains: “For once, there is the problem of vibrational energy loss, leading to what we call quantum decoherence. Think of it this way: in a violin, you provide a resonance body, which picks up the string vibrations and transforms them to sound waves carried away by the air. That’s what you hear. We had to achieve exactly the opposite: confine the vibrations to the membrane only, so that we can follow its undisturbed quantum motion for as long as possible. For that we had to develop a special ‘body’ that cannot vibrate at the membrane's frequencies.”

This was achieved by a so-called phononic crystal, a regular pattern of holes that exhibits a phononic bandgap, that is, a band of frequencies at which the structure cannot vibrate. Yeghishe Tsaturyan, a PhD student on the team, realized a membrane with such a special body at the Danchip nanofabrication facilities in Lyngby.

A second challenge consists in making sufficiently precise measurements. Using techniques from the field of Optomechanics, which is Schliesser’s expertise, the team created a dedicated experiment at the Niels Bohr Institute, based on a laser custom-built to their needs, and a pair of highly reflecting mirrors between which the membrane is arranged. This allowed them to resolve vibrations with amplitudes much smaller than a proton’s radius (1 femtometer).

“Making measurements so sensitive is not easy, in particular since pumps and other lab equipment vibrates with much larger amplitudes. So we have to make sure this doesn't show in our measurement record,” adds PhD student William Nielsen.

The optical measurement record (blue trace) shows peaks at all frequencies at which the membrane can resonate, from the fundamental mode, marked (1,1), to many overtones. From this characteristic pattern the researches can tell the location at which the laser beam hits the membrane (inset). Remarkably, already the quantum fluctuations of the laser light excite the membrane modes. (Credit: Albert Schliesser, NBI)

“Observing and quantifying these quantum fluctuations is important to better understand how they can affect ultraprecision mechanical measurements - that is, measurements of displacement, velocity or acceleration. And here, the multi-mode nature of the membrane comes into play: not only is it a more accurate representation of real-world sensors. It may also contain the key to overcome some of the traditional quantum limits to measurement precision with more sophisticated schemes, exploiting quantum correlations”, Albert Schliesser says and adds, that in the long run, quantum experiments with ever more complex mechanical objects may also provide an answer to the question why we don't ever observe a bass drum in a quantum superposition (or will we?).