Science and Physics World Breakthrough of the Year 2017

Science Breakthrough of the Year 2017 in the highly acclaimed publications, Science and Physics World, goes to the collaboration that led to the first ever observation of gravitational waves. The result is also on the list of the scientific magazine, Nature, ‘Science events that shaped the year’. An international team of physicists and astrophysicists took part in the work, which ushers a completely new era in astronomy. 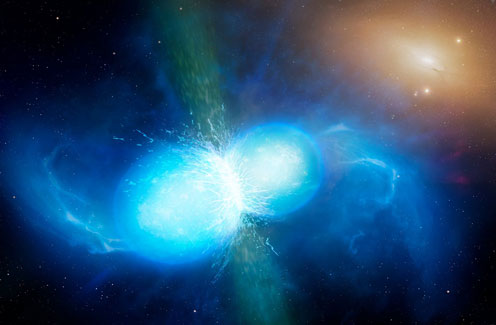 The discovery can not only help explain how heavy elements are formed and spread in galaxies. It also points to a new method of measuring the distances to remote celestial bodies, because when astronomers have both gravitational waves and light to work with, they can measure remote distances more precisely. Based on the distance measured, they can calculate how fast the universe expands.

Researchers from several research sections at the Niels Bohr Institute have contributed to the global collaboration and can claim their part in the high ranking on the breakthrough lists. DARK Cosmology Centre (DARK), Discovery Center, Cosmic Dawn Center (DAWN)  and Theoretical Particle Physics and Cosmology have led and participated in no less than 21 scientific articles in the wake of the observations of the collision between two neutron stars, and the gravity waves it sent through the Universe, simultaneously emitting observable light from the event.

The fact that this particular breakthrough is the winner of the prize is no surprise. “It is fundamental science and utterly exciting to be part of”, Professor Jens Hjorth from DARK says. When events this big take place in the universe, a large scientific network goes to work, directing the Earth based telescopes and satellites towards the correct location in the Universe. But they can only see a tiny portion of the sky at any given time. The IceCube Neutrino Observatory is unique in the manner that it makes measurements continuously across the sky, and is consequently able to help point out the initial starting point of such events, when neutrinos are involved.

With participation, either as first author or coauthors, in 21 of app. 100 articles on the subject pt., the University of Copenhagen is, with the scientists of the Niels Bohr Institute, exceptionally well represented in the Science Breakthrough of the Year by Science and Physics World.

Videnskab.dk also chooses the most important scientific breakthroughs every year, and you can get an overview of their candidates here , as well as vote for your favorite. Gary Shaffer from Niels Bohr Institute and Olaf Pepke Pedersen from the Technical University of Denmark won last year, and this year the observations of the neutron star and the gravitational waves is among the nominees.