Researchers of the Schliesser Lab at the Niels Bohr Institute and the Centre for Hybrid Quantum Networks (Hy-Q), University of Copenhagen, have demonstrated a new way to address a central problem in quantum physics: at the quantum scale, any measurement disturbs the measured object. This disturbance limits, for example, the precision with which the motion of an object can be tracked. But in a millimeter-sized membrane that vibrates like a drumhead, the researchers have managed to precisely monitor the motion with a laser—and to undo the quantum disturbance by the measurement. This allows them to control the membrane’s motion at the quantum level. The result has potential applications in ultraprecise sensors of position, velocity and force, and the architecture of a future quantum computer. It is now published in the prestigious scientific magazine, Nature. 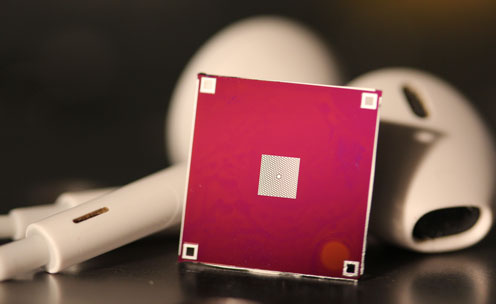 The central pad of a holey silicon nitride membrane (yellow, inside red silicon frame) vibrates like a “quantum drum,” thanks to the extreme acoustic isolation provided by the hole pattern invented at the Schliesser lab. Laser-based measurement of the drum’s vibrations then allows control of its motional quantum state, eliminating all noise—including the quantum perturbation by the measurement itself—analogous to noise-cancellation headphones. Earbuds in the background provide a size reference.

Living in a quantum world

At the quantum level, making measurements disturbs the object measured: using a laser beam to determine the position or velocity of an object requires bombarding it with many photons. The photons will kick it with every impact, and the object will start moving accordingly. As the photons arrive randomly, this results in additional random motion on top of the original movements, degrading the ability to measure and control the actual motional state. If the laser intensity is turned down, in order to reduce such measurement “backaction”, the signal-to-noise ratio in the detector goes down and the measurement becomes imprecise – again. “A strong measurement is needed, even though it results in quantum backaction. All we have to do is to measure and undo the quantum backaction. And that is basically what we’ve succeeded in doing”, Professor Albert Schliesser explains. 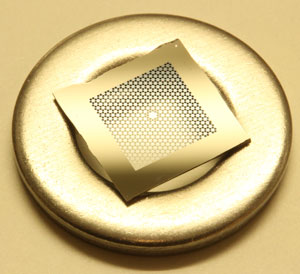 A silicon nitride membrane resonator suspended from a mm-sized square silicon frame. The hole pattern in the membrane has a phononic bandgap that confines vibrations at certain frequencies to the island (‘defect’) in the center.

“Our experiments offer us a really unique opportunity: our data very clearly show quantum effects, such as quantum backaction, in the measurement of mechanical motion. So we can test in our labs if clever modifications of the measurement apparatus can improve precision—using tricks that in the last few decades could only be theorized,”  he continues.

The experimental system is a ca. 3x3 mm-sized membrane made of the ceramic silicon nitride (Fig 1). It is under high tension and vibrates when struck—just like a drumhead. A special hole pattern invented in Schliesser’s lab isolates these vibrations extremely well: once it vibrates, it undergoes a billion oscillation cycles before it loses a significant fraction of its energy to its surroundings. (For a normal drum, that number would be about one hundred.) An additional advantage of silicon nitride is that it does not absorb any of the laser light used to interrogate its motion—so the membrane does not heat up , which would again lead to some uncontrolled motion of the membrane.

Excluding external perturbations through such extreme isolation, the scientists can focus on quantum effects of the measurement. Using a very stable laser, they can indeed measure the motion, including measurement backaction, down to the quantum level. “The remarkable thing is that we can then take this measurement record, run it through some electronics, and apply a counteracting force to the membrane, to undo the random effects of quantum backaction. It basically works like a set of noise-cancelling headphones, just in the quantum regime,” explains PhD student Massimiliano Rossi, one of the study’s lead authors. In this manner, the scientists could deterministically prepare the motion of the membrane in a pure quantum state—an objective physicists from a range of communities have pursued for the last 20 years. 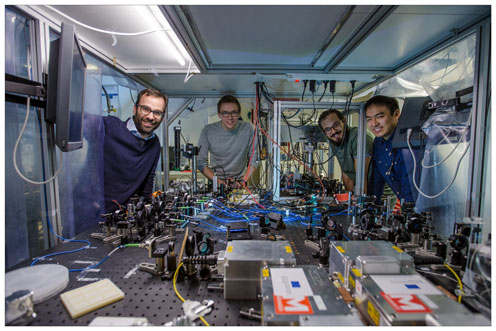 Group leader Prof. Albert Schliesser and researchers Dr. David Mason, Massimiliano Rossi and Junxin Chen (from left to right) leading the effort, around the optical table on which the experiments are conducted.

Perspectives for quantum control of motion

The reason lies in the versatility of such quantum control techniques when applied to motion. The LIGO interferometers are one example. They measure gravitational waves, emitted e.g. by merging black holes  billions of light years away, by monitoring the motion of large mirrors on earth. To recover these extremely faint signals, they have to push the sensitivity to such an extreme that the quantum limits of motion measurements come into play. On the other hand, controlling the quantum state of mechanical systems could be of use for special components of a quantum computer. A memory element, for example, would benefit from the long lifetime of mechanical excitations. Ultimately, quantum-controlled vibrations are also interesting from a fundamental point of view: as vibration implies mass is moving, which role does gravity play? How does it influence the quantum state of motion? Today’s accepted theories, let alone experiments, have yet to deliver clear answers to these question.