Oscillations are a fundamental phenomenon in physics. But it is not always readily apparent why these oscillations occur in nature. Why the oscillations in the populations of fireflies, in the concentration of proteins in a cell, neurons in the brain or other fundamental phenomena, for example? Researchers at the Niels Bohr Institute, the University of Copenhagen have now shown that when oscillations are synchronised with each other, it is possible to regulate the presence of crucial proteins in cells, by regulating the oscillations of just one protein. The results show promising potential in biological and medicinal research, and have recently been published in the science journal Cell Systems.

”It’s not quite logical”, explains Mathias Heltberg, postdoctoral fellow at the Niels Bohr Institute, ”exactly why these conditions aren’t simply constant. There is something absolutely fundamental at stake in oscillations, which applies across a broad field of areas within biology and physics, and perhaps, most importantly in the combination of the two”.

Oscillations occur in all shapes and sizes, from proteins in a cell to the rhythms of a day or a month. This study builds on research going all the way back to the 1980’s, when Mogens Høgh Jensen, Professor at the Niels Bohr Institute, collaborated with Professor Leo Kadanoff. Leo Kadanoff was a pioneer in statistical physics and dynamic systems. He recognised, already back at the start of the millennium, that there must exist a potential within oscillation systems, because there were so many different systems that oscillate.

P53 – the super-protein, which regulates other proteins in a cell, has attracted particular interest

Professor Mogens Høgh Jensen and postdoctoral fellow Mathias Heltberg have long worked with the protein P53, whose occurrence oscillates over a period of about five hours. P53 is the most well- described protein in cells because it regulates a series of other proteins that are important for wound healing, DNA damage and the development of cancer. The oscillations in the amounts and presence of P53 are therefore, in many ways, the key to understanding how P53 regulates the other proteins in the cell.

Synchronisation between coupled oscillations regulates the proteins in a cell

The previous research on oscillation, which forms the basis for the new results, focused on so-called coupled oscillations:  If one starts an oscillation with one frequency and combine it with an oscillation at another frequency then a synchronisation occurs. This is the principal that the researchers have worked from, in an effort to understand synchronisation as an inherent element in the functioning of the biological system, so that one can gain control and regulate oscillations, in particular in relation to developments in medical research across a wide range of fields.

Are different types of dynamics elements in nature’s toolbox?

Taking normal oscillations as a starting point, it is possible by combing just two systems to arrive at a multitude of different types of dynamics, including chaos. This fact is of special interest to physicists. “It’s actually quite impressive that if you combine to oscillations and if you do so at one coupling strength, then they synchronise and the result is a tightly controlled system. If, on the other hand, you use a different coupling strength it can become chaotic and create an extremely disorderly system containing a spectrum of amplitudes” says Mathias Heltberg. The researchers hope to demonstrate how the cells can benefit from the fact that many varied types of dynamics can occur, and potentially become different tools in the cell’s toolbox, and eventually helping to create the perfect regulation.

DNA damage – what regulates it, and can controlled oscillations help repair it?

The researchers are currently trying to define how the protein networks are connected by examining the periods that P53 oscillates within, for example.  ”It is a fundamental new understanding that one could say goes from physics over to biology. The basic principal of oscillation and how oscillations affect each other would appear to be transmissible to biology, so that we perhaps can create ideal conditions for the cellular reparation of DNA damage, or other biological phenomena, that can later be applied in medicinal and biological research”, clarifies Mathias Heltberg.

”This is why we have taken physics as our starting point, but kept a watchful eye on the implications for biology”, Mathias Heltberg continues. ”In physics, we basically describe how dynamic systems evolve over time, and illustrate this through mathematics. We can use this in biology; it allows us to regulate the way in which we control, for example, the amount of proteins in a cell to achieve the best result”. 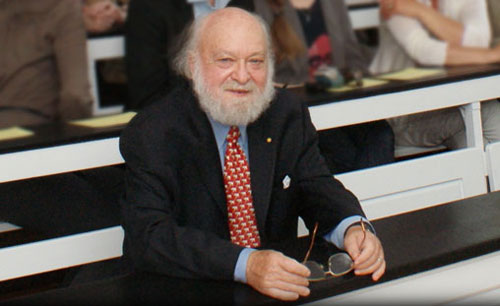 Leo Kadanoff was for a long period a member of the board both for NBI and the Niels Bohr Institute’s International Academy. He was also long considered a Nobel Prize candidate for his pioneering contribution to renormalisation theory.

Professor Mogens Høgh Jensen worked together with Leo Kadanoff in Chicago, where they, among other research, founded the theory for multifractals, and it is from their many original conceptual thoughts and ideas that the present research has sprung.