Jens Martin Knudsen (1930 - 2005) is a Danish legend within science. Those who were interested knew him from television as "the Martian" who was able to explain astronomy in a way that everyone could understand, while his students knew him as an excellent communicator who enthralled his audience. 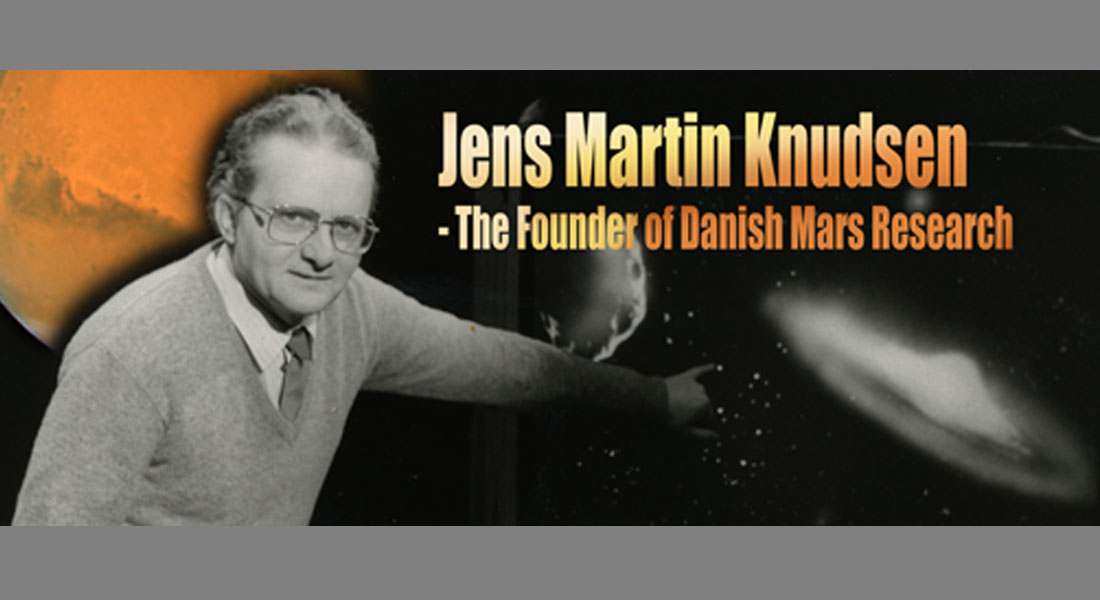 His research colleagues remember him first and foremost for his enormous contribution to Danish Mars research, but also remember him as a very modest person. It was his good ideas that connected Denmark to the American space agency NASA, for the first time in connection with the Pathfinder mission to Mars in 1997.

He broke through in his communication both in relation to his research at NASA, at international conferences and at home in Denmark – and today there are several small websites dedicated to Jens Martin Knudsen quotations. People listened when Jens Martin spoke and everyone clearly sensed his enthusiasm – he was that much of a fireball.

Jens Martin Knudsen put Denmark on the map of international planetary research in the 20th century. He often spoke about hearing "the music in physics" and was himself a true virtuoso on all of the strings of physics.

Where does all of that water come from?

The childhood home where Jens Martin was born in 1930 lay in Haurum near Silkeborg, close to forests and water. The home was strict, »The word duty was the word most often used in my home, «, he told Politiken, but total freedom reigned outside in the games with the other children and it was here that his interest in science was awakened.

»The first time I really wondered about something was when I was 11 or 12 years old. You see, there is a stream that runs near Haurum, Granslev Stream. And it was simply filled with trout. I often speculated how in the devil they could all be there. And I remember that we started to discuss while we stood and fished, how the river could just continue to flow. Where does all of that water come from?!,« explained Jens Martin Knudsen.

His grandmother was very good at math and perhaps she was the reason that all three of the grocer's children ended up being physicists.

After primary and lower secondary school, Jens Martin Knudsen worked as a postman for a few years before he took the trip into Silkeborg, where he trained to become a teacher. The thirst for knowledge and the desire to dig deeper prompted him to move to Copenhagen first to take a course and then to study physics at the Niels Bohr Institute at the University of Copenhagen

Professor Højgaard at the institute took special notice of the gifted Jens Martin Knudsen and recommended him for a two-year residence at Massachusetts Institute of Technology, M.I.T., in the United States from 1962 to 1964.

Here he became acquainted with what was then a brand new technique: Mössbauer spectroscopy, which, among other things, is a method for measuring the magnetic and crystallographic properties of solids.

He then returned home to the University of Copenhagen and a position as an associate professor position at the Niels Bohr Institute.

Jens Martin Knudsen was a fireball who burned body and soul for the thoughts and ideas he believed were right. As a young associate professor, Jens Martin believed that the most important task he could undertake was to help developing countries establish science education at the university level.

»I think there is a deep connection between the search for the truth about the universe and economic progress. All progress in human history has been created by solving concrete problems. There is always a stream of technological breakthroughs. The computer originated from the Apollo project, « he told Politiken many years later, when he was asked how science can help the poorest people in the world.

At the same time, he was characterised by a strong sense of justice, demonstrated by the fact that he always took the side of the weak and the oppressed. He had a great understanding of and compassion for the young men who had lost their way and fought on the wrong side during World War II and he often spoke of the Danish researcher Inge Lehmann and the injustice that she suffered in the form of a lack of recognition – because she was a woman, he believed.

Here, the experience from MIT proved useful: Mössbauer spectroscopy was, as previously mentioned, a new field and was characterised as being a relatively cheap and affordable technique that could be used for many different scientific problems.

Jens Martin Knudsen's social engagement led him and his wife, Anne, to Turkey for a few years, where he taught physics at the university in Ankara in the period from 1966 - 1967, and then to Brazil for about four years (1969-1973).

This made the technique ideal for use in developing countries and Jens Martin Knudsen's work included contributing to the establishment of a Mössbauer group in Brazil.

In 1973, Jens Martin Knudsen returned home to Copenhagen – though with a great desire to continue development work – including through a Danida project where he would help create a physics institute in Costa Rica. However, this ended up getting cancelled at the last minute and Knudsen instead threw himself into meteorites, almost by chance.

Jens Martin Knudsen was renowned as a great communicator.

As a teacher, Jens Martin Knudsen was a legend. In his teaching and communication, he possessed an extremely rare ability to cast a spell over his audience, regardless the subject.

Jens Martin often used to put things bluntly in order to make his point clear: He said that if he were to write a new history of Denmark, it would contain four chapters, one for each of the following people: Tycho Brahe, Ole Rømer, H.C. Ørsted and Niels Bohr. The rest of Denmark's history would be regarded as insignificant footnotes.

These four people will be remembered for as long as civilisation endures. Through their research, they have created the true backdrop for Denmark's prosperity. Moreover, their work helped to liberate Europe's intellectual life from the shackles created by church and state power.

The importance of natural science