Jens Martin Knudsen said himself that his own involvement in Mars research began gradually in Brazil in the early 1970s. The soil in Brasilia, where he lived with his wife, was unmistakeably red – created by thousands of years of switching between rainy and dry seasons that caused the iron minerals in the soil to rust. 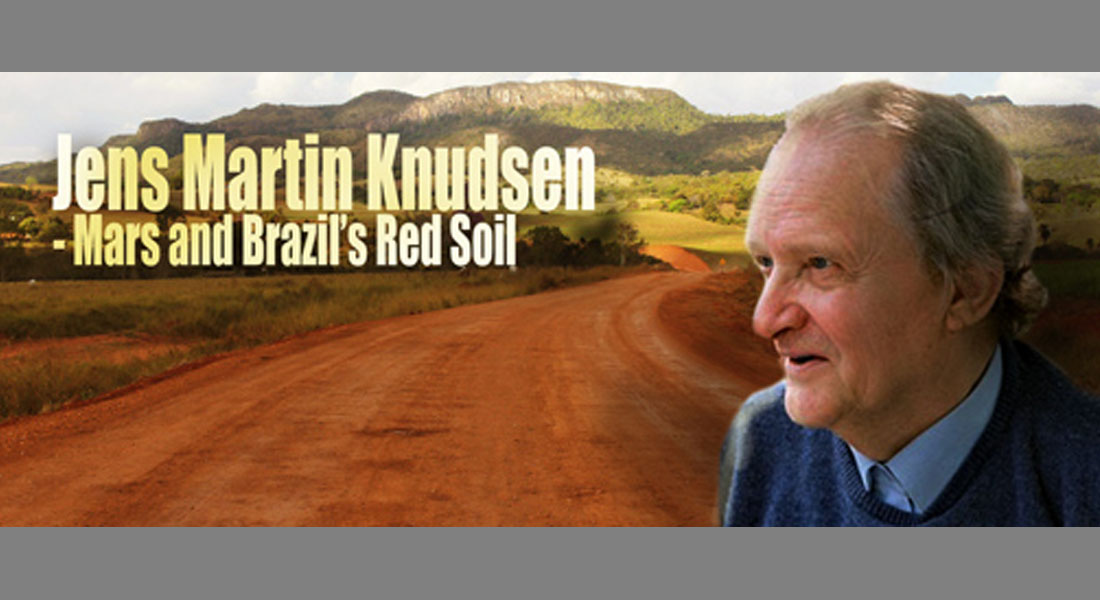 One evening, when he had the opportunity to directly compare the colour of Mars in the sky with the colour the red Brazilian soil, Jens Martin Knudsen wondered: Could there be something deeper behind this common colour? Was the red dust on Mars possibly created by similar processes and could it say anything about the existence of water on the red planet?

"Now I will start studying meteorites!"

But development work still tugged at him and when he returned to Denmark from Brazil in 1973, the plan was to move on to a Danida project, where Jens Martin Knudsen would help create a physics department at the University of Costa Rica. The suitcases were packed and the tickets were purchased, but at the last moment the Danish Parliament pulled its support for the project.

"So I drove home to my wife and said: We are not going to Costa Rica," explains Jens Martin Knudsen to Politiken. "We sat in the kitchen. And I remember that I said: Now I will start studying meteorites. I'll eat my hat if something doesn't come of it."

A few years before he died, the journalist Jens Kerte asked Jens Martin Knudsen what his life's greatest mistakes had been.The same day he went into the Geological Museum in Copenhagen, where he was handed a piece of the so-called Agpalilik meteorite, which crashed into northwestern Greenland 10,000 years ago and Jens Martin Knudsen now began to concentrate on the study of meteorites – especially iron meteorites, which was a natural subject for an expert in Mössbauer spectroscopy.

In addition to a historical book about Giordano Bruno that was never finished and a brief flirtation with communism in his youth, Jens Martin Knudsen said that not having enough time for development work with teaching physics was what he regretted the most.

While studying the iron meteorites, Jens Martin Knudsen returned to his idea to investigate whether there really could be a connection between the red soil in Brazil and the soil on Mars.

In this connection, he read everything that was available about studies of the Martian surface – and this was not long after the results from NASA's large Viking mission had been published.

Here Jens Martin Knudsen could read about small experiments on the landers that proved that the dust on Mars was magnetic. Elsewhere, he read about colleagues who seriously suggested that certain meteorites might have come from Mars ...

Thus, there was a natural connection between his interest in Mars and his interest for meteorites and quite naturally his interest fell on this particular group of meteorites. Jens Martin Knudsen decided to investigate whether the technique he was an expert in, Mössbauer spectroscopy, could contribute to the study of these possible Martian meteorites.

The group is called the SNC meteorites after the meteorites Shergotty, Nakhla and Chassigny.At that time, in the late 1970s, there was debate about the origin of a small group of meteorites that were slightly different from all other known meteorites, as this group had oxygen isotope ratios that put them in a category of their own.

Mössbauer spectroscopy is a technique where the most effective isotope you can use is iron and there is a class of meteorites called iron meteorites, which are ideal for studying with this technique because of their very high iron content.

Iron meteorites originate from the interior of asteroids and are released when asteroids collide with each other and are broken into pieces. Some of these pieces might happen to find their way to Earth.

Stone meteorites, many of which originate from the exterior of asteroids, are very common, while iron meteorites from the interior are somewhat more rare.

Now if you corrode the surface with a strong acid, this beautiful pattern will be accentuated and you can clearly see that the structure is comprised of different areas of slightly different composition.When you cut through an iron meteorite and look at it, you might notice some fine patterns on the surface.

You can clearly see bands, called lamellae, which are connected through the structure and extend through large areas of the meteorite.

In studying the iron meteorites, Jens Martin Knudsen, along with colleagues and students, carried out a number of meticulous separations of lamellae from the meteorites.

Together with his student Jørgen Albertsen, Jens Martin Knudsen discovered that the Mössbauer spectrum of a certain iron meteorite looked very different from the spectra of the more common steel alloys. See what the spectrum of the meteorite lamella looks like in the figure below.

But the discovery of a little, but significant deviation in the Mössbauer spectrum of the lamella in relation to conventional steel alloys, Jens Martin Knudsen immediately realised that they had discovered a new alloy.The separated lamellae from the iron meteorites are composed of alloys of iron and nickel and what Jørgen Albertsen and Jens Martin Knudsen discovered was that there is component in these lamellae in which the local symmetry around the iron cores is quite different than in ordinary iron.

It turns out that this new alloy is impossible to produce in large quantities in a terrestrial laboratory, as it can only be formed by very, very slow cooling over hundreds of thousands or even millions of years.