Niels Henrik David Bohr was born on 7 October 1885 in Copenhagen. His father, Christian Bohr, was a professor of physiology at the University of Copenhagen and his mother, Ellen Adler Bohr, came from a wealthy family that was known in Danish banking and political circles. Niels Bohr had an older sister, Jenny Bohr, and a younger brother, Harald Bohr. 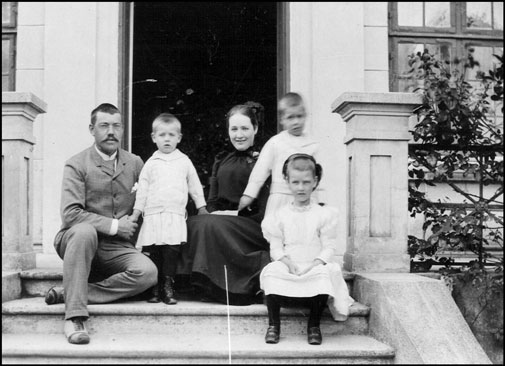 The family Bohr in front of their home in Bredegade in 1890. Seen here are Christian Bohr, Ellen Bohr and their three children Jenny Bohr, Niels Bohr and Harald Bohr. Niels Bohr is standing behind his sister on the right.

The children grew up in a home where curiosity and an interest in science was a natural part of everyday life. Christian Bohr, who was twice nominated for a Nobel Prize, often had guests from the Danish scientific community and Niels and his siblings were allowed to listen in on the adults’ scientific discussions. 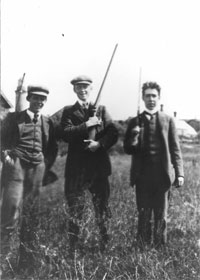 Niels and Harald Bohr on a fishing
excursion.

Already at a young age, Christian took the children around and let them experience Copenhagen and the nature around them and on Sundays he sometimes rented a boat and rowed over to Christianhavn’s canals with his sons. He also established the football pitches at Tagensvej and he took Niels and Harald with him every time he went out there to play. They played with great zeal and Harald even ended up playing on the Danish national team. Most summers were spent on Nærumgård, their grandparents large country house north of Copenhagen.

Good with his hands

Niels was very interested in using his hands on practical tasks. He was good at working with both wood and mechanical things and he repaired the family watches and everything else that needed to be repaired. If the rear sprocket on one of the bicycles cracked, Niels was ready to fix it. When the adults began to protest and mention a bicycle mechanic, his father always said: “Let the boy be. He knows what he’s doing.”

Christian Bohr was a great admirer of Goethe and knew large portions of Faust by heart. He quoted these for Niels on their trips or when the boy sat at his feet on the long winter evenings. This is how Niels came to be acquainted with Goethe and these great lines followed him throughout his life.

The brothers Niels and Harald