When Niels Bohr was seven years old, he started school at Gammelholm Latin School. His class was the last one that graduated under the old Education Act, but even though the school was strict and formal, he had no problems. Perhaps this was because the school’s teachings were supplemented by a great deal of teaching in the home.

Niels did well in most subjects and he was number one in his class. His worst subject was Danish writing and he had great difficulties in meeting the formal requirements that were asked of him. There are many anecdotes about his Danish essays. He once wrote the following essay: “A trip in the harbour: My brother and I went for a walk in the harbour. There we saw ships land and leave.”

He arrived at this alliteration after long deliberation and experimentation and he simply couldn’t understand the teacher’s failure to understand it. Another time, Niels received a essay topic called “Using the forces of nature at home”. It was too much for the future scientist and he threatened to start with “We don’t use the forces of nature in our home.” However, his brother Harald persuaded him not to. 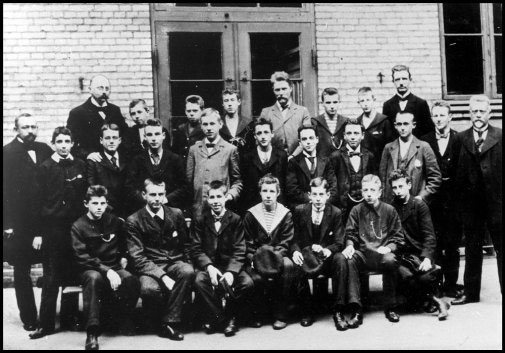 Group photo of the class at Gammelholm Latin School from 1901. Niels Bohr is third from the left in the first row.

Teaching in mathematics and physics began in the upper classes and Niels’ extraordinary abilities were quickly noticed. At that time, physics in secondary school was something that was gone over rather lightly. But Niels began to read more about the subject than was found in the textbooks and it was not long before he began to make small notes in the books where things were out of date or incorrect. When one f his classmates worriedly asked him what he if he would do if he had to go up to exams in one of the “incorrect” sections, he replied: Explain how things really work, of course.” 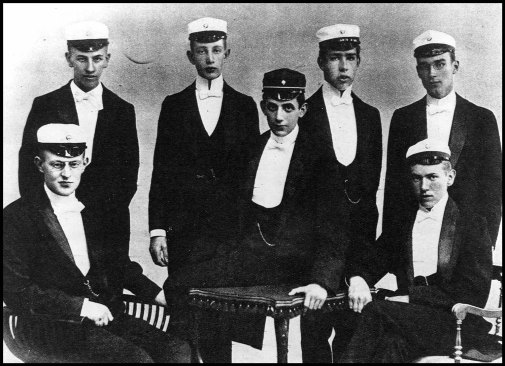 Niels Bohr and his classmates after taking the upper secondary school leaving exam in 1903. Niels Bohr is third from the right.