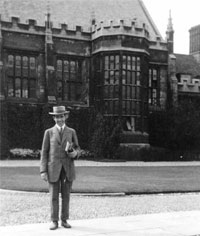 Niels Bohr in front of the University of Cambridge.

After taking his doctorate in physics at the University of Copenhagen in 1911, Niels Bohr received a scholarship from the Carlsberg Foundation to study abroad. Since the subject of his doctoral thesis was “The Electron Theory of Metals”, it was only natural for him to study under J. J. Thomson, who was known for having discovered the electron.

Six months later, in early April 1912, he was invited to Manchester by Ernest Rutherford to continue his studies there. Just a year earlier, Rutherford and his colleagues had discovered that the atom consisted of a positively charged nucleus, containing almost all of the atom’s mass, and negatively charged electrons orbiting the nucleus at a relatively great distance. This became the basis for Niels Bohr’s breakthrough as a physicist, as he realized that such a system would be unstable according to classical physics and that radical solution was required 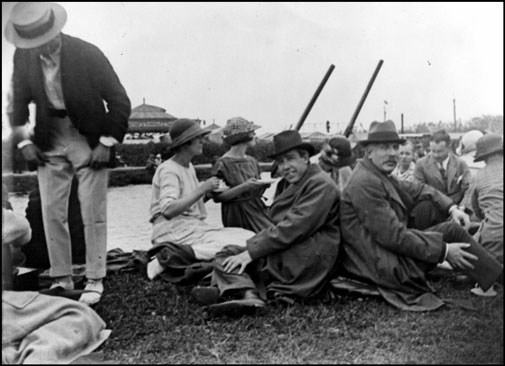 This picture was taken on one of Niels Bohr’s visits with Rutherford in Cambridge in June 1923. Niels Bohr (left) and Ernest Rutherford (right) are seen sitting with their backs to each other during an excursion to a Cambridge-Oxford boat race.

Inspired by Max Planck, who in 1900 had shown that heat radiation and light are not continuous, but consist of different energy levels, Niels Bohr – in direct contrast to classical physics – that the electrons could only move in certain orbits and that they released or absorbed electromagnetic radiation when they move from one orbit to another. Niels Bohr showed his work to Ernest Rutherford, who encouraged him to prepare a thesis for publication. 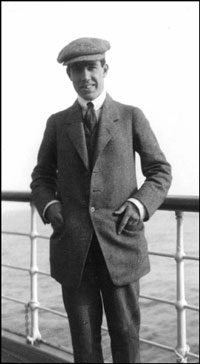 Niels Bohr on the way home to Copenhagen. He had only been in Manchester for four months. Yet during that short time he had formulated ideas that would soon lead to a revolution in physics.

Niels Bohr returned to Copenhagen at the end of July 1912, and on the first of August he married Margrethe Nørlund. Immediately after the wedding they travelled to Norway, where they would spend a few days. There Niels Bohr completed his first written work. He dictated and his bride wrote with clear, legible handwriting and she also improved his English. The system worked so well that Margrethe became her husband’s secretary.

Niels Bohr continued to work on his atomic model in the fall. At the beginning of 1913, his colleague H. M. Hansen brought to his attention physicist J. J. Balmer’s formula in experimental spectroscopy, an empirically derived formula that described, but did not explain, the spectrum of the hydrogen atom. It turned out that Niels Bohr’s theory accurately predicted this formula. "As soon as I saw Balmer’s formula, it was immediately clear to me,” said Niels Bohr later.

Niels Bohr published his ideas in three articles in 1913. Over the next decade the theory was further developed and modified by Niels Bohr and others. It predicted a number of experimental results and was gradually accepted among physicists.