In 1916, Niels Bohr was appointed professor of theoretical physics at the University of Copenhagen. Working conditions were rather poor and there was lack of both proper classrooms and laboratories.

He began to raise money for the construction of a more modern institute. Despite his young age and new title, he went to the University and the Danish parliament and asked to be allowed to build a new institute. His project was approved at the end of 1918 and in March 1921 his Institute for Theoretical Physics was dedicated. 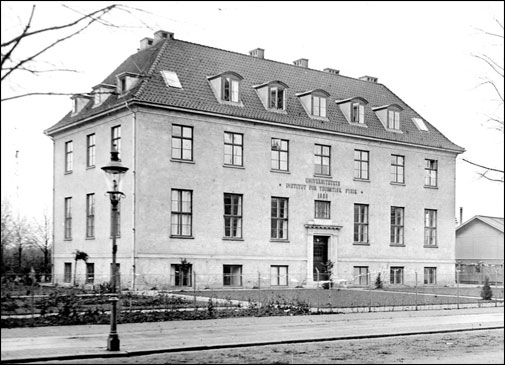 The newly built institute was dedicated in 1921 with Niels Bohr as the director. It was given the name “The University of Copenhagen’s Institute for Theoretical Physics”. In everyday speech, it was simply called “The Niels Bohr Institute”, which it was indeed officially renamed in 1965.

Niels Bohr had always dreamed of international collaboration in science. With the new institute, it was possible to realize this dream in Denmark. Many foreign researchers visited Copenhagen, where they exchanged views and ideas with each other and with Niels Bohr. Several of them were later rewarded with the Nobel Prize for their work. 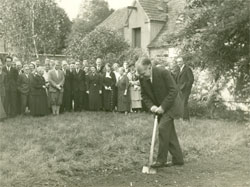 The Niels Bohr Institute has been extended many times since its original construction. The first time was in 1924. Niels Bohr is seen here digging the first spade full for an expansion in 1936. Niels Bohr was finally satisfied after the last expansion in 1945.

In 1929, the University of Copenhagen began to consider the creation of a mathematical institute. Until then, the mathematicians had met in private and at the observatory in the Round Tower. Niels Bohr’s brother, Harald Bohr, was at the time a very distinguished mathematician in Denmark and when he was appointed professor of mathematics at the University of Copenhagen in 1930, Niels Bohr suggested that the new mathematical institute could be built next to his on Blegdamsvej. The two brothers had been very close since childhood, but there were also practical advantages of Niels Bohr’s offer: The two new institutes could share common researches like a canteen and teaching classrooms and it allowed for a closer collaboration between the physicists and mathematicians. The work started in 1932 and in 1934 Harald Bohr could call himself the head of Denmark’s first Institute for Mathematics.

Today, the Niels Bohr Institute is spread across 10 different buildings located between Blegdamsvej and Fælledparken, most of which are connected by underground passageways. There are more 1000 staff members and students at the Institute, whose research spans astronomy, geophysics, particle physics, quantum physics, nanophysics and biophysics.