Niels Bohr’s work led to a comprehensive mapping of the atomic structure of protons, neutrons and electrons. In the early 1920s he was able to explain the entire periodic table using his atomic theory. 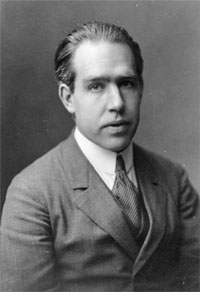 In 1922, Niels Bohr received the Nobel Prize in Physics for “his services in the investigation of the structure of atoms and the radiation emanating from them”.

In the fall of 1922, it was announced that Niels Bohr would receive that year’s Nobel Prize in Physics for his work. It was a dramatic turnabout for the Nobel Foundation, which had previously prioritized advances in instrumentation and strongly questioned the new quantum physics.

In his Nobel lecture, Niels Bohr talked about his work and ended with an exciting announcement: One of the holes in the table of elements, the long missing element number 72, had just been found. He later dubbed the element Hafnium, which stood for the Latin name for Copenhagen.

In addition to awarding the 1922 prize to Niels Bohr, the Nobel Foundation gave Albert Einstein the delayed prize for 1921 – not for his theory of relativity, but for his discovery of the photoelectric effect. That is how it happened that the two giants of twentieth century physics not only received the Nobel Prize in the same year, but even in the same field – nuclear physics. In his congratulatory letter to Albert Einstein, Niels Bohr mentioned how appropriate that Ernest Rutherford, Max Planck, and now Albert Einstein, had received the prize in this field before him. In his reply, Albert Einstein described his comment as a truly ‘Bohrian’ expression of humility. Niels Bohr’s comment was, however, also an expression of satisfaction, which he also expressed elsewhere, that his own area of work was finally getting the attention it deserved. 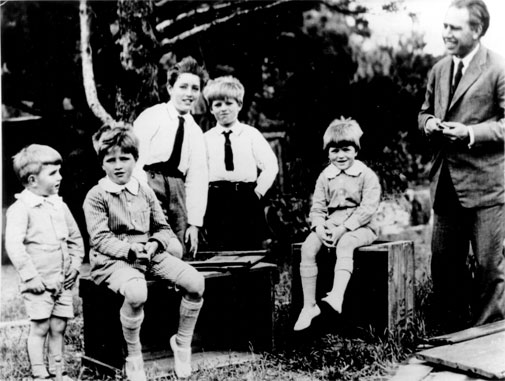 Niels Bohr with his five sons at the summer home in Tisvildeleje. From left to right are Ernest, Erik, Christian, Hans and Aage. Niels and Margrethe Bohr had six sons in total, but one died as a baby, while another, Christian, died in a boating accident as a 19 year old. Ernest was an Olympic hockey player and Aage became a very successful physicist like his father.

With the Nobel Prize award money Niels Bohr bought a summer home in Tisvilde. It was called Lynghuset and was a beautiful, thatched house lying on top of a low dune at the edge of the forest. Over the entrance door he had a horseshoe hanging. One visitor noticed it once and asked surprised: “You don’t think that kind of thing brings luck?”. “No, no, of course not,” answered Niels Bohr, “but I have heard that also brings luck, even if you do not believe in it.”

Lynghuset was just the right place for Niels and Margrethe Bohr’s five lively sons and went there as soon as the school holidays began. But Niels Bohr still had work to do, even in the countryside. Colleagues and students from the institute often visited him and in order to get the necessary peace and quiet for their work, Niels Bohr built “The Pavilion”, a little thatched room not far from the house. Though it often happened that work gave way to ball games, swimming or walks with the boys. The men who were at the institute the longest and collaborated with Niels Bohr on his projects, often became “uncles” for the boys.

The Nobel Prize in Physics