Congratulations to Charles Marcus on being elected member of the United States National Academy of Sciences. Charles Marcus is a professor and Center Director of the Center for Quantum Devices (Qdev) at the Niels Bohr Institute, University of Copenhagen. He is also Principal Researcher AI&R at the Microsoft Corporation. 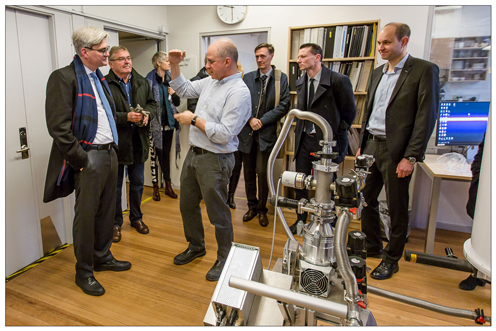 Charles Marcus is here giving former minister Søren Pind a lesson in quantum physics during a visit to the Center for Quantum Devices in October 2017. Photo: Ola J. Joensen

Charles Marcus came to Copenhagen in 2012 in connection with the establishment of the Center for Quantum Devices, a Center of Excellence supported by the Danish National Research Foundation. He has received numerous awards for his research over the years, and of particular interest to a Danish audience perhaps, became a foreign member of the Royal Danish Academy of Sciences and Letters in 2012.

In 2016 Charles Marcus’ name became practically synonymous with the agreement between the Innovation Fund Denmark and the Microsoft Corporation to launch a collaboration aiming at the invention of a quantum computer. Even though it is yet unknown just how much power such a device would have to communicate, compute, measure and simulate physical and chemical systems, it is expected that rich and surprising phenomena will emerge.

As a consequence, the researchers, students and visitors at the Center for Quantum Devices face the double challenge of building controlled, interacting quantum devices and simultaneously develop the theoretical research field of understanding their power. Ideas and projects are intertwined at Qdev, everybody is invited to participate regardless of position, students and professors alike, and in this way the projects undertaken there are very much in line with the legacy of Niels Bohr himself.

At the Niels Bohr Institute we all congratulate Charles Marcus on the election.