Villum Kann Rasmussen Professor Charles Marcus, University of Copenhagen, will build the world's first topological quantum computer at the Niels Bohr Institute in collaboration with the Technical University of Delft and Sydney University under a Microsoft sponsored program working directly with scientists at Microsoft. 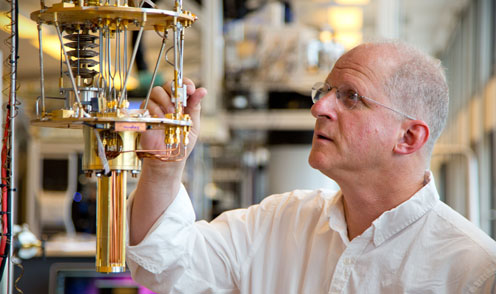 Professor Charles Marcus is one of the world's leading researchers in the field of quantum electronics. Photo: Ola Jakup Joensen

The theoretical part of quantum electronics and the software development are now so far advanced that, according to Microsoft, it is time to attach people with practical skills to the job - i.e. the people who are going to design and build the world's first topological quantum computer.

In theory, a single quantum computer has as much power as all existing computers on Earth and will bring huge changes for society globally.

Professor Charles Marcus is one of the world's leading researchers in the field of quantum electronics and director of the Centre for Quantum Devices sponsored by the Danish National Research Foundation.

The collaboration between Professor Charles Marcus and Microsoft will not only involve a huge technological step forward. The collaboration will also mean that the University of Copenhagen will be a magnet worldwide for both foreign and Danish top researchers and students within the field.

Professor Charles Marcus came to the University of Copenhagen from Harvard University in 2012, and today he receives considerable funding from, among others, the Villum Foundation, the Danish National Research Foundation and Innovation Fund Denmark. This spring, Innovation Fund Denmark invested DKK 80 million in a new Danish quantum centre (Qubiz), where Charles Marcus is one of the key players.

Niels Bohr was involved in developing the theoretical basis for quantum physics through his construction of the atomic model in 1913. With the development of a quantum computer, quantum physics may find a whole new use.