Chinese Minister of Science and Technology visits NBI with a delegation

In connection with the PG4 Summit in Copenhagen last week, where the Chinese Minister of Science and Technology Wang Zhigang was to meet with the prime minister, he also stopped by the Niels Bohr Institute at Blegdamsvej on Friday, where Rector Henrik C. Wegener and Head of Department Jan W. Thomsen received him. 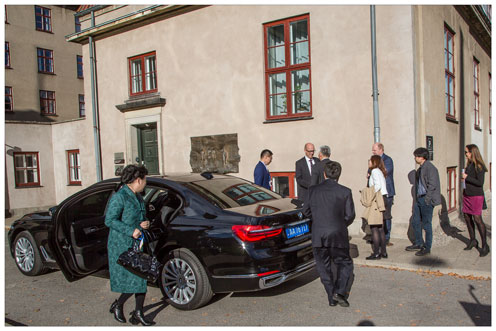 Rector of the University of Copenhagen, Henrik C. Wegener Head of Department Jan W. Thomsen receive Minister of Science and Technology Wang Zhigang and his delegation outside the Niels Bohr Institute, which was declared a Historical Site of great international importance for the development of physics and research by the European Physical Society in 2013. (Click on the image to see more and larger images)

The visit was arranged by the Chinese Embassy and the Chinese Ambassador Deng Ying in Copenhagen, and in addition to the summit in Copenhagen, he also visited the Copenhagen Zoo to see the nearly completed Panda House. He had wanted to see the Niels Bohr Institute during his official visit to Denmark. Minister Wang is a trained engineer and was previously the head of the China Electronics Technology Group Corporation before being appointed Minister of Science and Technology earlier this year. 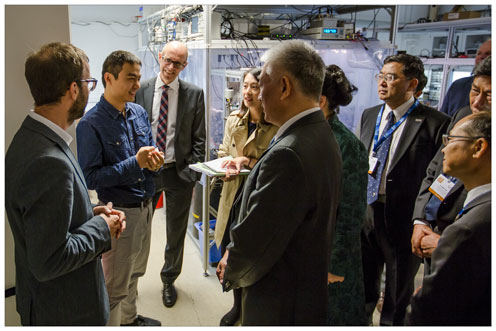 The institute has always been internationally oriented and houses some of the world’s leading quantum researchers. After the introduction, the delegation continued down into the basement of the old institute where they visited one of the many quantum laboratories and Prof. Albert Schliesser, who came to the Niels Bohr Institute from the École Polytechnique Fédérale de Lausanne, EPFL in Lausanne, Switzerland, welcomed Minister Wang and his delegation, which could barely fit in the cramped laboratory.

Schliesser talked about the institute’s quantum research, which spans a wide range. The research focuses on everything from quantum internet and quantum computers, sensors and atomic clocks for teleportation of information from light to light and quantum encryption, etc., and the Minister of Science and Technology listened with great interest and asked many questions. After half an hour, the entourage continued on up to Niels Bohr’s study, where coffee and cake was laid out and their conversation continued. 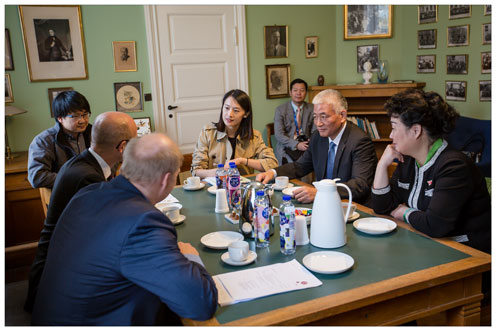 Niels Bohr died in 1962, and his study room remains precisely as it was then. Many great personalities made their way here to have a conversation with Niels Bohr, who placed great emphasis on openness and dialogue. He created a fundamentally new way of thinking in physics, while at the same time creating an international environment that attracted some of the most talented researchers from around the world. (Click on the image to see more and larger images)

The visit ended with an exchange of gifts, followed by a group photo outside the Niels Bohr Institute.