From musician to professor of quantum physics

Peter Krogstrup Jeppesen has had a meteoric career in a complex area of research and after only a relatively short period of time in the world of physics, he is at the forefront of cutting edge research that points to the future quantum computer. He first started studying physics in his early 30s – before that he was a professional musician playing everything from jazz to heavy metal. Now he is a professor of quantum physics. 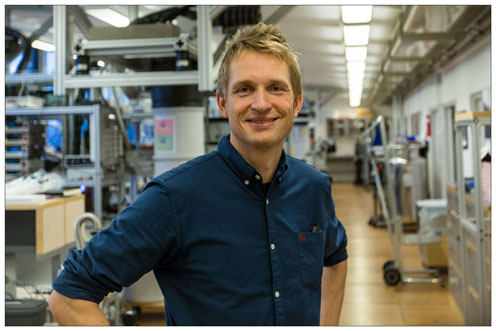 Peter Krogstrup in the QDEV laboratory at the H.C. Ørsted Institute. He can now call himself a professor as of 1 May 2018. Photo: Ola J. Joensen

It is an unusual career path Peter Krogstrup Jeppesen has taken, and no one in their wildest dreams could have imagined a short 15 years ago that he would one day lead a fast-paced development caravan racing towards the holy grail of quantum mechanics – the quantum computer.

It was not the traditional academic route for Peter, and after primary school in Solrød near Copenhagen and one year at a youth folk high school, he ended up in music instead of upper secondary school. An electric guitar as a confirmation gift sparked his interest and for many years he taught and played in both progressive and primitive rock bands. He was named Guitar Player of the Year at the ‘Guitar Institute’ in London when he was in his mid-20s. As a 28-year-old, however, he started questioning things and the thought struck him that his teenage dream of becoming the world’s best guitarist might not be so realistic after all.

He had not yet received any education and as he approached the end of his 20s and with a child on its way, he decided – that now was the time. He did not really know what he wanted to be and a somewhat reluctant school counsellor had to be convinced to let him start at HF single subject. He considered becoming an architect, but his interest in the sciences won. “Mathematics and physics in particular were very natural to me,” says Peter, and “perhaps it was my grandfather’s interest in physics and Niels Bohr that nevertheless had taken root in me at the time.”

In 2004, he started studying physics at the Niels Bohr Institute at the University of Copenhagen, where his interest in theoretical astrophysics led him to write his bachelor on the distribution of dark matter around galaxies. However, the research in material physics made such an impression on him that he switched to condensed matter physics, where he already at an early stage contributed with new crystal growth theories based on “equilibrium thermodynamics” – but also made experimental breakthroughs with the cultivation of new types of ultraclean nanocrystals that have great potential for solar cells, which attracted attention. Peter’s PhD dissertation was defended in 2013 and was based on a long series of scientific articles in recognised journals. 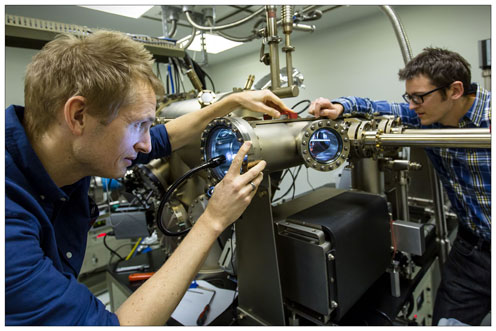 Here Peter Krogstrup is seen with colleague Thomas Sand Jespersen in the laboratory at the Center for Quantum Devices at the H.C. Ørsted Institute where they successfully researched superconductive hybrid crystals. Photo: Ola J. Joensen

Modern quantum physics has been studied at the Niels Bohr Institute since 2001, including quantum teleportation, atomic clocks, quantum networks and precision measurements, and in 2012, with the establishment of the Center for Quantum Devices, a DNRF 'Center of Excellence', they focused heavily on the development of quantum computing. Peter Krogstrup’s great interest in quantum physics in crystalline materials naturally led him to this new center, which later, in 2015, signed a grant and collaboration agreement with Microsoft for the development of quantum computing with the American research scientist Professor Charles Marcus.

Peter’s innovative approach to the development of new hybrid quantum materials has contributed new continued breakthroughs in recent years. The materials have such great potential for future quantum technologies that Microsoft Research has chosen Peter to lead the development of the crystals for their research in quantum computing.

He has recently received two major prestigious grants, one from the European Research Council (ERC) in 2017 and another from Microsoft: Project Q Experimental Physics Initiative in 2018. His department currently has 12 researchers and 4 students.