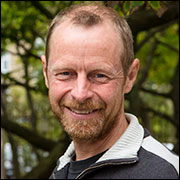 My main fields of interest are in climate research and numerical weather prediction (NWP) with special foci on climate dynamics/physics and numerical methods used in atmospheric models, and on coupled atmospheric chemistry transport models.