Professor Dorthe Dahl-Jensen, head of the Centre for Ice and Climate at the Niels Bohr Institute has received a grant of 25 million kroner from the A.P. Møller and Chastine Mc-Kinney Møller Foundation for a major new research project in Greenland. The aim of the project is to to drill a 2½-kilometer deep ice core through a large fast-flowing section of the ice sheet in northeast Greenland and gain new knowledge about why and how the fast-flowing ice is moving. This knowledge could improve forecasts of future sea level rise. 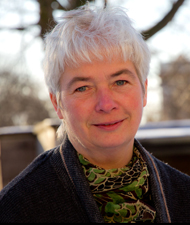 Professor Dorthe Dahl-Jensen, head of the Centre for Ice and Climate at the Niels Bohr Institute has received a grant of 25 million kroner from the A.P. Møller Foundation for a major new research project in Greenland

The climate is getting warmer and the sea level will rise in the future. The sea level will primarily increase when the large ice sheets melt and the melt water flows out into the oceans, but how much and how quickly?

Half of the loss of ice occurs when ice melts in the peripheral regions. The other half of the mass loss is related to calving ice from fast flowing ice terminating in fjords along the coast and the ice is extruded as icebergs. It has surprised the experts that the fast flowing glaciers and ice streams have doubled their speed in some places – for example, the ice in the Jakobshavn ice stream on Greenland’s west coast moved at a speed of 7 km per year before 2002 and has since then increased it’s speed is 14 km per year. The mass loss from the ice streams has thus increased significantly.

In order to explain how fast the flow is happening and how it can increase, the major new research project, EGRIP, will drill a 2½-kilometer deep ice core through the ice sheet in northeast Greenland, on top of a large ice stream.

“Our drilling will take place in the large ice stream in northeast Greenland. At the site we have selected the  ice flows about 50 meters per year. Very little is known about how the ice in the ice stream moves, so the purpose of the project is to increase our understanding of how the ice streams are contributing to the rapid loss of the Greenland ice sheet,” explains Dorthe Dahl-Jensen, professor and head of the Centre for Ice and Climate at the Niels Bohr Institute at the University of Copenhagen. 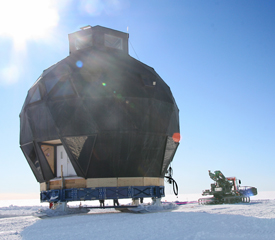 The project will start this year with moving a large camp building, dome and tracked vehicles with five large sleds with equipment from the previous drilling, NEEM, which lies 420 km from the new drilling site.

Danish researchers have been pioneers in ice core research for many years. The Centre for Ice and Climate at the Niels Bohr Institute has led seven ice core drilling projects through the Greenland ice sheet. The aim has been to unlock past climate all the way back through the Ice Age to the previous interglacial period around 125,000 years ago. The several kilometer thick ice sheet has been formed by snow that falls and remains year after year and is gradually compressed into ice. Each annual layer can tell us something about the temperature the year the snow fell and by analysing every annual layer, the researchers can reconstruct past climate.

To get good climate records of the parameters influencing the climate, it has been important to find drilling sites where the ice was not moving too much. But in this new project it is just the opposite – here they want to drill at a site where the ice is flowing quickly. This is to study the dynamics in the ice sheet.

“This will be the first time an ice core has been drilled through fast moving ice and it will be demanding on drilling techniques, as the borehole will have moved 180 meters over the three years that it takes to drill all the way through the ice. The drill itself is 13 cm in diameter and just starting each new day of drilling will mean that the bottom of the hole has shifted,” says Dorthe Dahl-Jensen.

She explains that they will study how the ice in the ice stream moves and where the water under the ice is located – is it in channels and how quickly does it flow? When they get down to the bottom, they carry out further studies and will send a camera down so they can see the bottom.

The project will start this year with moving a large camp building, dome and tracked vehicles with eight large sleds with equipment from the previous drilling, NEEM, which lies 420 km from the new drilling site. 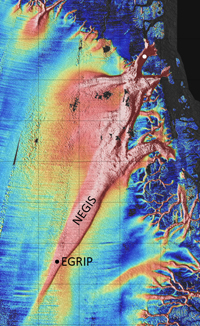 The new drilling will take place in the very large ice stream in northeast Greenland. The ice stream begins near the summit of the ice sheet and reaches out to the coast, where it divides into three major ice streams. The surface speed of the ice is shown by colour. The dark colour flows more than 150 meters per years.

Denmark will lead the project and finance half of the cost. The second largest partner is the United States, which will provide the flights and participate in the research. In addition, it is expected that researchers from four nations will participate: Japan, Norway, Germany, France and Switzerland.

The fact that a camp with infrastructure and landing area for planes is being established means that it will also be possible for other researchers to come and carry out many other types of studies in addition to the drilling project.

For example, some researchers will set up GPSs on the ice all the way out to the edge to see how fast they move and they want to make seismic measurements on the surface of the ice to map the subsurface and maybe find out whether there is increased thermal heat from the Earth’s interior warming the ice from below at the source of the ice stream. In addition, there will be icebreakers, which will both observe the calving of icebergs at the margin of the ice stream and they will also drill sediment cores from the sea bed to study past calving of icebergs into the sea.

The project, which starts this year, is expected to be completed in 2020. Without this large grant from the A.P. Møller Foundation, the project could not have been started and carried out as desired. The research will contribute new knowledge that can improve our ability to predict what happens with the loss of ice mass from ice sheets and sea level rise in the future.

Dorthe Dahl-Jensen, professor and head of the Center for Ice and Climate at the Niels Bohr Institute, University of Copenhagen. 2289-4537, ddj@gfy.ku.dk

Read about the Ice Core research