Eugene Polzik, professor and head of the research group QUANTOP (Quantum Optics Laboratory) at the Niels Bohr Institute at the University of Copenhagen, has been conferred the Knight’s Cross of the Order Dannebrog. 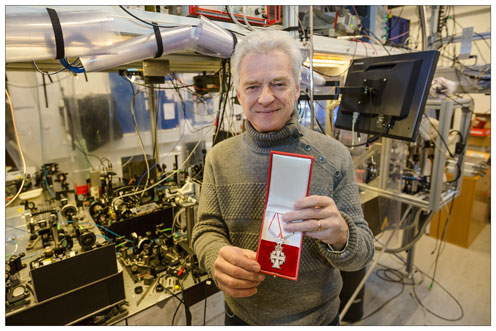 Eugene Polzik in the laboratory on Blegdamsvej: “When I was offered a position in Denmark back in the 90s, I was excited about the opportunity to start a new research field of quantum optics in the country where Niels Bohr had lived and worked."

Eugene Polzik, a Russian-born American, studied physics at St. Petersburg University. In the late 80s, he and his family moved to the United States. He worked at the California Institute of Technology (Caltech), where he was part of the research group that was one of the first in the world to conduct teleportation from light to light. Later in the 90s, he started a collaboration between Caltech and Aarhus University, where he moved to in 1998.

He was appointed Professor of Atomic, Molecular and Optical Physics at Aarhus University in 1999, and in 2001 he received a Centre of Excellence for quantum optics, QUANTOP. It was the first major Nordic research centre in modern quantum physics. In 2003, he moved the centre to the Niels Bohr Institute at the University of Copenhagen, where the research team has since had many major scientific breakthroughs. His latest research showed that the Heisenberg Uncertainty Principle does not limit the accuracy with which movement can be measured.

Eugene Polzik is a member of the Royal Danish Academy of Sciences and Letters, Fellow of American Physical Society and a Fellow of Optical Society of America. According to Scientific American, his work on quantum teleportation put him on the list of the top 50 researchers in this field of research in 2007.

He has received many awards and in 2010 he received the ‘Gordon Moore Distinguished Scholar Award’ in recognition for his work with quantum information, quantum optics and quantum metrology. In 2014, his research was voted the best research of the year by Ingeniøren and in that same year he received the Danish Association of Masters and PhDs Research Award.

A special recognition for me as a foreigner

“When I was offered a position in Denmark back in the 90s, I was excited about the opportunity to start a new research field of quantum optics in the country where Niels Bohr had lived and worked. However, at the time I did not expect that I would stay in Denmark for the rest of my life. Now I am still here after 25 years and I think Copenhagen and the Niels Bohr Institute are the best places for me to be as a person and physicist. I am not Danish and I never will be, but I feel at home here, especially because NBI has become an international gathering point for physics, just like it was in Niels Bohr’s time,” he explains.

And continues “Knight of the Dannebrog is a special recognition for me as foreigner engaged in international science in Denmark. I regard it as a prize – not just for me, but also for a great group of researchers and students that I have been so privileged to work with all these years. I am very pleased to see many of my former team members carrying out excellent research in quantum optics in Denmark and abroad.”

Eugene Polzik, professor and head of the Center for Quantum Optics, Quantop at the Niels Bohr Institute, University of Copenhagen, Phone: +45 2338 2045 Email: polzik@nbi.dk 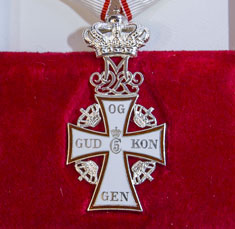 About Dannebrogsordenen: It is a Danish chivalry instituted by the King Christian 5. in 1671 and later changed and expanded. It has in its present form six degrees: Major commander, big choir, commander of 1st grade, commander, knight of 1st grade and knight.  Expand >>

The order consists of a white enameled gold or silver cross with a red border, a royal crown and the monarch of the ruling monarch. The page carried outwards has the inscription "God and the King" and in the middle the monogram of King Christian 5th.

The formal basis of the order is Frederik 6.s open letter from 1808 supplemented with later rescripts. Some provisions of the Order's Statutes from 1693 are still valid. The ruling monarch is the mayor and appointments usually take place on the basis of settings that have passed a ministry. Since 1951 women have been admitted to the order. The Dannebrog order is awarded by the regent without a minister's signature. All badges must be returned when the wearer dies.