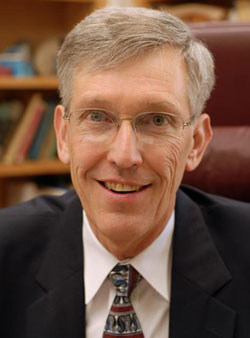 Abstract:
Quantum networks offer opportunities for the exploration of physical
systems that have not heretofore existed in the natural world with
applications to quantum computation, communication, metrology, and quantum
many-body physics. To create a quantum network, quantum states are
generated and stored locally in quantum nodes. These nodes interact over
quantum channels to enable entanglement to be spread across the network.

In my lecture, I will provide an overview of quantum networks from formal
to physical. I will discuss research for the laboratory realization of
small networks composed of atoms that interact strongly by way of single
photons. The goal is to achieve lithographic quantum optical circuits, for
which atoms are trapped near nano-scopic dielectric structures and wired
together by photons propagating through optical waveguides. Single atoms
can endow quantum functionality for otherwise linear optical circuits and
thereby provide the capability to build quantum networks component by
component.

Kimble became a professor of physics at Caltech in 1989. He was named Valentine Professor in 1997 and director of the Institute for Quantum Information and Matter at Caltech in 2011. He has cemented his reputation in quantum optics through discoveries relating to quantum measurement and quantum information science.

Kimble's research has led to greater understanding of novel quantum states of the electromagnetic field, such as "squeezed" and "antibunched" light. His demonstration in 1995 of a quantum phase gate that operated at the single photon level and was suitable for the implementation of rudimentary quantum logic has been considered seminal in establishing the experimental foundations of quantum information science. Kimble and his colleagues have also made important contributions to theoretical physics, including a new paradigm for the realization of distributed quantum networks.