Priya Natarajan is a Professor in the Departments of Astronomy and Physics at Yale University. She is a theoretical astrophysicist interested in cosmology, gravitational lensing and black hole physics.

Title: From seeds to behemoths: tracking the formation of supermassive black holes in the universe 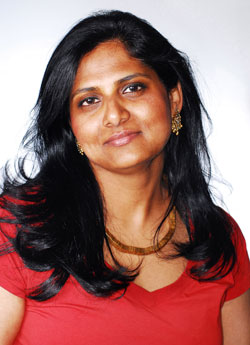 Abstract: Populations of quasars powered by accretion onto SMBHs with masses in excess of 10^9 solar masses are now detected when the Universe was barely a Gyr old. And in the local universe the centers of several nearby brightest cluster galaxies harbor behemoths that weigh ~ a few times 10^10 solar masses.

I will discuss how these monster black holes likely form and what observational signatures can test the various formation & growth scenarios. Aside from outlining the current status of our understanding, I will close with the open exciting questions and challenges ahead for theory given the wealth of observational data in hand and in the pipeline.

About Professor Priyamvada Natarajan: Priyamvada Natarajan is a theoretical astrophysicist interested in cosmology, gravitational lensing and black hole physics. Her research involves mapping the detailed distribution of dark matter in the universe exploiting the bending of light en-route to us from distant galaxies. In particular, she has focused on making dark matter maps of clusters of galaxies, the largest known repositories of dark matter. Gravitational lensing by clusters can also be utilized to constrain dark energy models and she has been developing the methodology and techniques to do so. Her work has demonstrated that cluster strong lensing offers a unique and potentially powerful laboratory to test evolving dark energy models.

She was awarded a Guggenheim Fellowship for the academic year (2010 - 2011), during which she was also a JILA Fellow at the University of Colorado at Boulder and a visiting professor at the Institute for Theory and Computation at the Harvard Smithsonian Center for Astrophysics. She was enrolled as a graduate student in the Spring (2011) at the Program in Science, Technology and Society at MIT. She was a resident fellow at the Rockefeller Bellagio Center in Italy during May-June 2011. In 2008-2009, she was a Fellow at the Radcliffe Institute for Advanced Study at Harvard University and held the Emeline Bigelow Conland Fellowship.