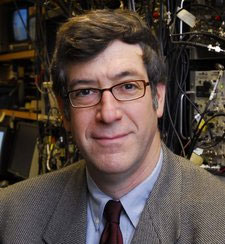 Abstract: We are developing new approaches to the control of atomic motion. The starting point is the supersonic beam, an ultra-bright source of atoms. We use pulsed magnetic fields to stop the beam, and this approach is now proven to be optimum using an adiabatic slower. We further cool the atoms using a one-way wall, a direct realization of the historic thought experiment of Maxwell's Demon, proposed by James Clerk Maxwell in 1871.

This toolbox of new methods is an alternative to Laser Cooling, with much better predicted performance in terms of generality, flux of ultra-cold atoms, and phase-space density. We will use this ultra-bright source of atoms to pattern the nanoscale, bridging between atomic physics and condensed matter/material science.

I will conclude with some surprising ramifications of Maxwell's Demon which may even save your life.

Mark Raizen holds the Sid W. Richardson Chair in Physics at the University of Texas at Austin, where he is a Professor of Physics. He pioneered the study of quantum chaos with cold atoms. In parallel, he developed a program to study quantum transport phenomena, using cold atoms to study phenomena from condensed matter physics.

In the past decade, Raizen and his group pioneered the development of general methods for cooling and trapping of atoms, applicable to most atoms in the periodic table. These methods are now predicted to far-surpass laser cooling, opening new directions in basic science, as well as world-changing applications.