THE NOBEL PRIZE IN CHEMISTRY 2014

Prize motivation: "for the development of super-resolved fluorescence microscopy"

Eric Betzig, Stefan W. Hell and William E. Moerner are awarded this years Nobel Prize in Chemistry for having bypassed a presumed scientific limitation stipulating that an optical microscope can never yield a resolution better than 0.2 micrometres. 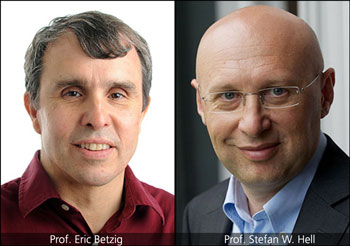 Using the fluorescence of molecules, scientists can now monitor the interplay between individual molecules inside cells; they can observe disease-related proteins aggregate and they can track cell division at the nanolevel.

The methods developed by Eric Betzig, Stefan Hell and W. E. Moerner have led to several nanoscopy techniques and are currently used all over the world. The three Laureates are still active researchers in the large and growing community of scientists spearheading innovation in the field of nanoscopy. Recently, Stefan Hell has peered inside living nerve cells in order to better understand brain synapses, and Eric Betzig has demonstrated how to track cell division inside embryos. These are just a few of many examples.

In this double Niels Bohr Lecture, Eric Betzig and Stefan Hell will give give us their own account of the discovery and what is yet to be explored.