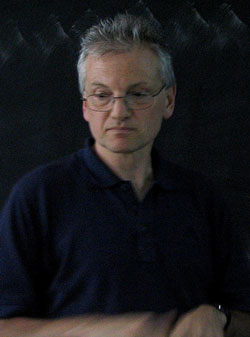 Abstract: Since the development of Quantum Mechanics in the 20ies it has remained a hotly debated issue, whether one should be satisfied with such a statistical theory, with no precise way of predicting single events, or look for an underpinning deterministic dynamics (hidden variables).

This debate has recently been re-energized by the discovery by Y. Couder and E. Fort in Paris that droplets can “walk” on a vibrating fluid surface, pushed by the waves they produce - just like the “pilot wave” dynamics envisaged by de Broglie and leading to the discovery of Quantum Mechanics.

Such walking droplets have been shown to exhibit typical quantum behavior such as discrete orbital states, tunneling through a forbidden region and, at least experimentally, quantum like self-interference on passage of a double slit arrangement.

In the lecture we shall assess this development and discuss, whether this kind of dynamics might actually lead to a new understanding of Quantum Mechanics.

Tomas Bohr is Professor of Physics in the Section ”Biophysics and Fluids” at the Department of Physics as well as director of Center for Fluid Dynamics at DTU. Tomas Bohr’s field of research is Complex Systems. He has worked with chaos, turbulence  and statistical mechanics and written ”Bevægelsens Uberegnelige Skønhed. Om kaos.” (Gyldendal 1992) for the lay audience and is co-author of the monograph ”Dynamical Systems Approach to Turbulence" (Cambridge 1998). In later years he has been particularly interested in strongly non-linear fluid flows, which, even if they are not turbulent, give rise to surprising structures - in particular surfaces with edges, corners and needles. Simultaneously, he studies biofluid dynamics in the context of planktonic organisms and the sap dynamics in plants. Tomas Bohr combines theoretical work with simple model experiments on e. g.  hydraulic jumps, bathtub vortices, sand ripples and sap flows in trees.